It’s no secret that maintaining fastball velocity is important for a pitcher’s sustained success—or in the case of some, sustained whatever.  A set of simple linear regressions for all pitchers in the “PITCHf/x era” (2007 – 2012) suggests that, given no other information about the pitcher, a one mph drop in 4-seam fastball velocity corresponds to a 3-ish% increase in ERA-based statistics. Not to pick on the Giants, but think about guys like Tim Lincecum and Barry Zito. They lost zip, and they lost effectiveness. Nothing mind-blowing there. 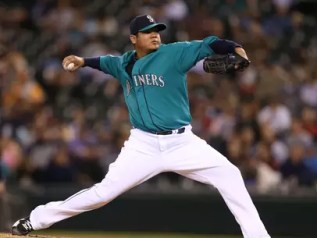 While it’s easy to find examples supporting that success hinges on fastball velocity, there are definitely counterexamples. Francisco Liriano appears to have pitched as hard in 2012 as in 2010, but his 2010 season was a CY Young caliber year by FIP standards (2.66 FIP). His 2012 season? Well, not so much (4.34). And what about our beloved King, the leading actor in this sequence of posts? His fastball velocity has been dropping for some time now, and yet we’ve been treated to a few seasons in which he did win, or could have won, the Cy Young. We also know that Felix Hernandez has quite a repertoire of pitches that might be able to offset velocity loss. I think it’s fair to start with the premise that, for almost all pitchers, a lower fastball velocity is a bad thing. But maybe for some pitchers, other skills allow them to work around that decreased velocity.

My goal here is to identify common traits among the pitchers that are most capable of pitching around velocity loss. This post focuses on dividing the pitchers into groups, and looking at the relationship between fastball velocity and success within each group.

Using a clustering algorithm—probably not unlike the one PITCHf/x uses—the following six groups of pitchers were defined:

Group One: These pitchers represent the four-seamer and curveball types. They mix in some changeups, and might toss a two-seamer or a slider here and there, but not as often. Justin Verlander, for example, has been part of this group in four of his big-league seasons since 2007. Other repeat offenders include Heath Bell (6 seasons), Francisco and Wandy Rodriguez (4 and 5 seasons, respectively), and Bronson Arroyo and Yovani Gallardo (4 seasons apiece).

Group Two: This is the club of two-seam, slider and changeup hurlers. They throw some four-seamers, but the two-seamer is the featured fastball of the group. Mr. Liriano was part of this group in 2010 and 2012, and some other notables include C.J. Wilson (3 seasons), Gio Gonzalez (3), and the more recent version of Doug Fister (2011 and 2012). Though Fister’s curveball has gotten better in recent years, he still doesn’t quite throw it enough to join group one.

Group Three: This is the funk squad. Of the nearly 4,000 pitcher-seasons in the data set, just 22 were funneled into group three. The following two members should give away the group’s theme: Tim Wakefield (5 seasons) and R.A. Dickey (3). These are the knuckle ballers. The rest of this group is made of up players that flirted with the knuckler in short stints.

Group Four:  The featured pitch here is the cut fastball. Many members of group four mix in four-seam fastballs, and sliders and curves are on the menu, but the cut fastball defines this group of players. The first name that came to my mind was Roy Halladay, and I was not surprised to find his past four seasons (2009-2012) in this grouping. The first name that came to your mind was probably Mariano Rivera, and of course, all six of his seasons since 2007 made the cut (see what I did there?!). Cliff Lee would be a good guess, except he throws too many two-seamers and gets tossed between groups two and six. Other notables in this club include Chad Billingsley and Dan Haren (3 seasons apiece).

Group Five: Sinker ballers.  More often than not, they feature a slider as their “breaking ball.” Derek Lowe is a three-time member (2010-12), and the 2010-2011 version of Felix jumped over to this group. Other notables include Justin Masterson and Aaron Cook (4 seasons apiece), as well as former Mariner, Brandon League (3).

Group Six: This is a lot like the first group, with guys that feature the four-seam fastball, except these pitchers throw more sliders, less curveballs, and more changeups. Matt Cain’s been here for as long as PITCHf/x has. Max Scherzer and Ricky Nolasco are included, as are relievers Aroldis Chapman, Billy Wagner and Brad Lidge. Johan Santana, master of the changeup, was a member of group six for four seasons. This is by far the most popular grouping, featuring 65% of all pitcher-seasons, and 60% of all pitches thrown.

Now that we have our groupings by pitch type, let’s look at some splits. The following chart articulates the differences in FIP- between the hardest throwing 25% and softest throwing 25% of each group. Remember that anything less than 100 is better than average. The results are below:

The chart shows that, again, pitchers that throw fast also tend to have more success, and that is regardless of grouping. There are other reasons that might explain the splits, like the soft-tossers including more injury-laden pitchers, but velocity itself almost surely causes some of the change in    FIP- success.  With that in mind, I want to specifically highlight group five for two reasons, and then leave the rest of this analysis for Part Two next week.

1) Group five represents the sinker-balling pitchers, and these pitchers saw the smallest gap in success between the hard and soft throwers. Besides the small sample of knuckle ballers in group three, every other group saw a significantly larger split than did group five.

2) After three consecutive seasons among the four-seam and sliders club (group six), the computer classified Felix Hernandez as a sinker-balling group fiver for his 2010 and 2011 seasons.

PITCHf/x tells us that Hernandez started throwing a sinker at least 30% of the time in 2010. While it may be a misclassified pitch—Felix’s crazy movement can confuse computers as it does batters—PITCHf/x still un-biasedly and objectively argued that he became the member of a group of pitchers that seems most able to work around decreased velocity. This could mean nothing, or it could mean a better outlook for a pitcher with decreasing velocity on a seven-year, $175M contract.

In Part Two I’ll take a look at the possibility of pitchers being able to offset velocity issues with increased movement on certain pitches. Perhaps Hernandez is also headed toward that group. PITCHf/x is truly a baseball nerd’s paradise.