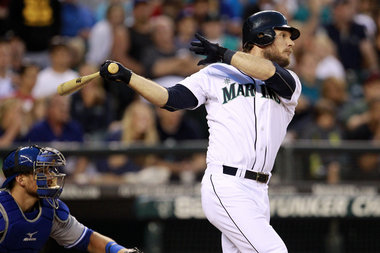 Since the trade that sent John Jaso to Oakland and brought Mike Morse to Seattle I’ve made no secret about my dislike for the trade. A couple days later I softened my stance, but pointed out some inaccuracies that have been commonly expressed. For example, people cite Jaso’s plate appearances and game total as him being a part time player. However, he had only 20 plate appearances the whole month of April, and 341 the rest of the season.

But one of them has really stuck in my craw, and after interacting with some commenters I decided to take a different look at John Jaso.

A lot of people are a bit skeptical of Jaso’s surge this year. He surpassed career highs in most contemporary metrics, and for stretches of the season was very tough to make swing at a bad pitch. However, last year I wrote about how unlucky Jaso had been compared to what his batted ball types would indicate using a rudimentary system that is essentially expected triple slash line based on BABIP on each type of batted ball.

According to our method, Jaso should have had a BABIP of .316 in 2010 and a .312 in 2011. There is certainly some idea that some of Jaso’s grounders that may be become hits for players with better foot speed wouldn’t have become hits for Jaso. For the purposes of this article it’s good to know that exists, and that it should perhaps temper our expectations, but doesn’t mean that our findings aren’t valid.

If Jaso had a league average BABIP in all categories he’d have compiled 24 more hits in the past two years. If we add those 24 hits to his total over the past two years, and an extra 36 total bases based on Jaso’s average of about 1.5 bases per hit, with only average luck, Jaso’s triple slash line would have been .287/.395/.429.

There’s no doubt, Jaso has been pretty bad in his career against lefties, and a lot of people are using that as evidence that Jaso has very little value, and that the trade was a major win for the Mariners.

It’s a really valid point, and a deficiency in Jaso’s game that limits his value. Jaso is really best suited to be part of a platoon, and he’s not very good defensively. That doesn’t mean however, that his value would be completely diminished if he hit more often against lefties.

For these purposes we’d actually end up helping Jaso because we’d give him credit for a lot of average plate appearances that he may not be capable of against lefties. We’d do the same for righties, but in this case he’d actually be hurt by this, as he’s significantly better than average against righties.

The stat we’ll use to determine production is wRC+. The reason for that is that wRC+ is basically the park-adjusted version of wOBA on a 100 scale, where 100 is average, 110 is 10 percent above average, and 90 is 10 percent below average.

Because there aren’t a lot of double-splits available we’ll use a 100 wRC+ as the average for both platoon splits. This isn’t precisely accurate because like-handed hitters hit worse against like-handed pitchers, but for the purposes of display, we’ll deal. wRC+ is our chosen stat because it is easy to display, is park adjusted, and weights offensive events for a baseball player.

This is what Jaso’s regression would look like if we regressed each of his platoon splits to 1,000 plate appearances, and took a league-average 70 percent of his plate appearances against righties, and 30 percent against lefties. (hat tip to swedishfish007 on my formulation mistake and subsequent correction)

Considering how few plate appearances he has against lefties in his career, though this method helps support my opinion, it’s probably not a fair display.

This is what it would look like if we assumed that his 165 wRC+ against righties and 24 wRC+ against lefties were real.

Here’s what it would look like it if we used Jaso’s career wRC+ for both platoon splits to analyze his overall production.

That’s not how things would work in an ideal split though. These numbers are significantly hurt by Jaso’s lack of playing time early in the season and his shared time with Miguel Olivo.

And these numbers bring Jaso all the way down to having a reverse platoon, and he’s still an above-average hitter.

A platoon can be divided much more efficiently than this.Chances are the real Jaso is somewhere in the middle of this, but even if we fix Jaso’s plate appearances against righties at 308, despite the fact that he had only 20 plate appearances in April, and that Miguel Olivo received significant playing for most the season (including 175 PA vs righties of his combined 315 PA), he is still a league average hitter at a level of plate appearances that qualify for the batting title (502 plate appearances).

A good comparable for Jaso as a guy that didn’t have depth chart or manager-confidence keeping him out of the lineup was Garrett Jones. Jones took 84.3 percent of his hacks against righties, but still managed 515 plate appearances, and appeared in 145 games. Jones has crushed righties for his whole career to the tune of a 130 wRC+, and has been similarly abysmal against lefties, with a 55 wRC+.

Jones hits more homeruns than Jaso, but he also strikes out more, walks less, and hits less line drives. He’s not a perfect comparable, but his weighted value and the platoon splits of that value are nearly identical to Jaso. Jones has a career 112 wRC+, though he’s taken about three-quarters of his career plate appearances against righties.

Mind you, Jones is a first baseman/right fielder, two premium offensive positions. Jaso is a catcher. He’s not a good one, but Jones isn’t a good first baseman or outfielder, and if you’ll remember, the Mariners were actually rumored to be interested in trading Jaso for Jones earlier this offseason.

The problem with having two first baseman in a platoon is that it basically lends itself to decreased versatility. Good first baseman usually play just about every game.

The catcher position is much different. Miguel Montero led the world in innings played behind the plate last year with 1190.0.  His team played 1433.2 innings, so Montero, the most used catcher in baseball, missed more than 27 full games worth of innings behind the plate. The catcher position is a position screaming for a platoon, but one where the supply of competent left-handed hitters is scarce.

Jaso represented a unique opportunity for the Mariners: a quality hitter who could take more than 500 plate appearances at catcher, designated hitter, and maybe even first base occasionally, and be very productive doing so.

wRC+ figures taken from Fangraphs, and thrown into a formulated spreadsheet. Some noise occurs as a result of Fangraphs rounding their wRC+ to the nearest whole number. For example, Jaso’s 2012 wRC+ is 143 at Fangraphs