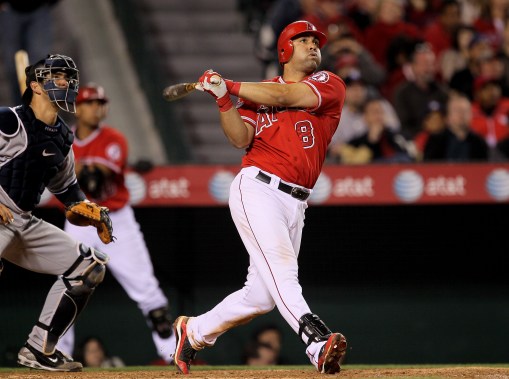 The Mariners made a trade this afternoon that is quite frankly phenomenal. There’s no sense being poetic or cryptic over the Jason Vargas for Kendrys Morales swap that the Mariners pulled off today, and it probably isn’t difficult for anyone to see the benefit, or how the Mariners got objectively better.

In a post in early November I detailed my Mariners offseason plan that was an alternative to the one that Dave Cameron posted over at U.S.S. Mariner. In my post, one of my ideas was to trade for Kendrys Morales:

Despite the assumption in that post that the Mariners would pay Figgins entire salary, the biggest pushback I got was that it would be impossible for the Mariners to trade Figgins for Morales, ignorning the additional value in this trade in the form of Shawn Kelley and a prospect. And this certainly wasn’t a trade that I expected to be fair. The Angels have more to gain from a marginal value gain than the Mariners, who weren’t “One Josh Hamilton” away from a playoff surge. Even before they signed Hamilton the Angels had a log jam in their lineup. I wrote this in November:

Morales is coming off the first full season he’s played since 2009. He broke his leg celebrating a walk off homerun halfway through 2010, and missed all of 2011 because of complications from the same injury. Last year he became the third man where the Angels should really only field two guys: their first base and DH positions.

That logjam got no more clear when the Angels inked Hamilton, but it finally forced their hand that they’d have to trade from their surplus of position players that included Peter Bourjos, Mark Trumbo, Vernon Wells, and Hank Conger in addition to Albert Pujols, Mike Trout, Hamilton and Morales. Those guys are all kind of 1B/DH/LF kinds of guys. Sure Conger is a nominal catcher, and Bourjos would be the starting center fielder on just about any team that didn’t field Mike Trout at the position, but whatever.

For the Angels this trade wasn’t unlike the Mariners swap of Trayvon Robinson for Robert Andino. They traded a guy that was unlikely to receive a full complement of plate appearances in Morales for a guy that is likely to get every opportunity to pitch 200 innings for the third straight season in Vargas.

In terms of value, Vargas and Morales were equal-ish last year. Morales was a win better according to Fangraphs’ fWAR, and a win worse according to Baseball Reference’s rWAR. Part of the reason for the ~two win difference for Vargas is that he constantly out-resulted his peripherals in Safeco Field. Of course, with the dimensions of Safeco Field changing the chances of Vargas remaining ahead of his peripherals were less likely, and the chances of him posting better peripherals were also very low. Baseball measures their WAR based on runs allowed per nine innings, while Fangraphs uses fielding independent pitching (FIP).

In Anaheim, things probably won’t be better for Vargas in terms of park effects, though he’ll have a world-class outfield behind him and his fly ball tendencies. Vargas’ HR/FB rate took a pretty significant jump this year, and while his results weren’t hurt by that (3.85 ERA) there’s a good chance that a large contributor to his results was a .254 BABIP against. Some people will attribute his results to the “twist” he added to his wind up, or that he’s in perceived better shape and didn’t completely collapse in the second half, or when the weather got warm. There’s a lot of things that point to those being total hogwash in terms of actual effects, and that Vargas’ improvements were simply a result of the natural ebb and flow of luck for a pitcher that pitches around the strike zone, and that pitches to contact.

Nonetheless, Vargas has had stretches of absolute brilliant results over the past two seasons, and has pitched well above where anyone thought his ceiling was when he came to Seattle as a throw-in in the trade that sent J.J. Putz to the Mets. Vargas is amid his prime, and has more likely than not reached his peak already.

Morales is a different story.

Despite being only four months younger than Vargas, Morales has considerable upside. He’s had only 733 plate appearances in the past three years after missing half of the 2010 season and all of the 2011 season. Despite that he posted a 118 wRC+ and a .194 isolated power last year. He saw a considerable spike in his strikeouts (up to 22.2 percent), though he performed better in August and September (19.49 K%, .264 ISO, 137 wRC+).

His strikeout rate and reduced power could easily be attributed to rust and irregular playing time. It could be that he’s simply not as good as he used to be. But he’s unlikely to be worse than Jason Vargas, and while he’s in his final year of arbitration, if he improves this year, or even remains similar with additional playing time, it’s hard to envision a scenario where Jason Vargas would have had more value to the Mariners than Morales. Morales has a pretty clear shot at being the best hitter on the Mariners next year, and the Mariners got him for an overvalued innings eater primed for an enormous regression.

And if the Mariners get to the trade deadline, or at the end of next season, they may be able to squeeze more value out of Morales in the form of a trade, extension, or a declined-qualifying-offer-turned-draft-pick.

And with a portion of the Mariners offensive woes solved, they can turn their attention to replacing Vargas. The free agent market remains pretty deep with average-ish pitchers like Vargas, and while the Angels near-$150 million payroll may have made adding additional salary an issue, the Mariners have plenty of budget room after losing out on Hamilton.