With the Seahawks entering the 2014 offseason with very little cap room, about $2.5 million based on projections of the 2014 salary cap, they’ll have to make some personnel changes. Keep in mind, this cap space is before the team does anything, and while that includes releasing or re-structuring players to create more cap space, it also includes retaining the team’s own free agents, or extending their pre-free-agency players – all actions that reduce cap space. Those two instances will be discussed in later updates of the 2014 Seattle Seahawks offseason financial primer.

In a scenario where Player A signs a five-year, $30 million contract, with a $10 million signing bonus, with even salaries (not common, but easier for this exercise), his impact on the cap over the course of that five-year contract may shake out like this:

Dead money represents the amount the team would have to count this contract against the cap, even if they were to release the player. In order for a team to save money on a player by releasing him, his base-plus-non-signing-bonus-guarantees must be a larger number than his remaining prorated signing bonus, or dead money.

As such, a team’s potential cap savings in this case would be (negatives in parenthesis):

Under this contract, the team would only receive a savings if they cut the player prior to his fifth season.

For the sake of being comprehensive, it should be noted that a cap hit may be taken across two seasons, but the team would have to wait until after June 1 to cut the players, meaning they’d be well into the new league year — which begins free agency, and almost a month after the draft. Such a scenario is unlikely in the case of any of these players as it relates to a release, though not as it relates to a potential contract restructure.

In the primer I noted the following cases where the Seahawks may save money by releasing a player – and each should also be viewed through the lease of restructuring a contract.

Often times players will restructure a deal after their skills have diminished, or their cap number has escalated beyond affordability. This usually comes with some consideration, usually some kind of additional signing bonus, to pair with a substantially reduced cap number. This helps the team because they’re able to retain the player for cheaper. It helps the player because he’s able to retain a portion of his base salary without the uncertainty of being subject to the open market.

The players with the largest cap-savings potential for the Seahawks are the following: 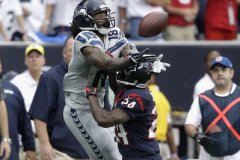 I’ve been a pretty strong advocate for not only Sidney Rice’s skills – I think he’s probably a top-five receiver in the NFL in terms of raw talent – but also for the proper viewing of his productivity. Rice was a top-10 receiver in 2012 in terms of DVOA, and has been a large part of a passing attack that isn’t giving its receivers a ton of chances to be traditionally productive. Rice has made some silly drops in his career in Seattle, and has endured some injuries that may be considered the product of poor technique at times, but the sum total of Rice has been a player who has been productive in the environment that he was a part of. That said, coming off of an ACL tear, and with Percy Harvin on the roster, Golden Tate a free agent, and Doug Baldwin a restricted free agent, Rice makes very little sense at $9.7 mllion, especially when the team stands to clear a bunch of cap space by cutting him. Rice’s days in Seattle may not be over though, and for good reason. He’s coming off of an injury, and has familiarity with not only Seattle, but also Darrell Bevell, who has been Rice’s offensive coordinator for nearly his entire career. Seeing Rice back on a one-year, low-base contract to rehab his value would make a ton of sense for the Seahawks, and would allow Rice to rehab his value before hitting free agency again going into his age 29 season.

At the end of the 2012 season, Clemons was nursing a torn ACL, but going into the second year of a three-year, $22 million contract. Clemons came into 2013 with only a potential $2.3 million cap savings for the Seahawks, making even a half-season of him worth likely more than his cap savings. Barring Clemons being absolutely dominating in limited time in 2013, though, his late-2012 injury likely spelled some sort of move after the 2013 season. The team can save $7.5 million by releasing Clemons, and while Clemons’ 4.5 sacks in 14 games are hardly dominating, his impact on the team’s pass rush is less than completely quantified by sacks alone. That said, he’s going into his age 33 season, and the team has Cliff Avril under contract next year, and Michael Bennett, though a free agent this offseason, expressing a desire to return. Both Bennett and Avril present more versatility on the line than Clemons, who has been most-successful in the famed LEO position that the Seahawks employ. Like Rice, Clemons’ career in Seattle may not be over simply because he’s likely to be released. He’s had a lot of success in Seattle, and may be willing to take a low-guarantee contract to remain on a contender.

At this point it’s probably worth noting that this list is in a particular order, mostly derived from total cap savings, with a secondary sort based on likelihood of release or restructure. Okung is very talented, and losing him would be a large blow to an offensive line that has been suspect in the past two seasons, but Okung has missed at least one game in every season of his career so far, including half of the 2013 season, and a combined 11 games in his first three seasons. Okung is most likely to be extended/restructured, but if the team is able to find talent at the position elsewhere, including the draft or free agency, the team could potentially opt for certainty over top-end talent. If Okung is restructured, you could reasonably expect the contract to be back loaded, as the Seahawks should be attempting to maintain their present talent level as long as possible, and taking cap hits on the downturn of their win curve is sometimes a necessary evil.

Red Bryant is heart and soul of this defense, anecdotally. He’s turned the 5 technique defensive end position into a viable position in a 4-3 defense. The problem is that such a position has been considered somewhat fungible in the past. For my money, when Red Bryant and Brandon Mebane were free agents, I’d have expected their respective contracts to be reversed. I fully respect the talent-evaluation skills that the Seahawks front office has, and they’ve been amazing at finding players that fit their scheme, but this defense is only going to get more expensive, and as their costs shift to the secondary, Bryant could quickly become a luxury the team can’t afford, especially considering the often inexpensive market for quality 5 technique ends.

As discussed in the Red Bryant portion of this, Brandon Mebane received a shockingly low salary when he signed his most recent contract. You may remember that he was in talks with the Denver Broncos, with the Seahawks eventually luring him out of Denver. When I heard that I assumed they’d be paying out the nose, but instead they signed a contract with only a $1 million signing bonus and pretty reasonable $5.5 million base salaries over the final two years of the contract. Mebane has been good, and like many defensive tackles, judging his contributions on sacks, or even tackles, is pretty short-sighted. The team has had success finding talent at the position at lower costs though. Jordan Hill showed some promise, and Tony McDaniel and Clinton McDonald have made several key plays throughout the season. That’s not to say that Mebane hasn’t facilitated those plays, or that any of those three can simply plug-in and replace Mebane immediately. It’s important to reiterate that these moves are about sacrificing at a position of relative strength, as opposed to larger sacrifices at other positions. This team will be paying Richard Sherman a lot of money in the very near future, and losing Richard Sherman would ostensibly have a greater impact on the team’s overall talent than losing Mebane.

Remember that year when the Seahawks went on that huge spending spree? They signed Miller, Rice, Robert Gallery and Tarvaris Jackson all in one offseason. Clearly those moves had varying success, but Miller was perhaps the most curious. Signing a tight end to a large contract didn’t seem wise as the team needed a complete overhaul of their roster – as evidenced by the staggering number of personnel moves they’ve made in recent years. Like many of the players in this post, Miller’s production has informed public perception of him somewhat unfairly. Miller has probably spent more time in pass protection than any tight end on a successful NFL team in recent years. He’s yet to cross the 400-yard threshold in three years with the Seahawks, and while I think that his signing was unwise, his tenure in Seattle is bound to be under-appreciated. If the team plans to improve its offensive line, something they should be planning on doing, and to use their tight ends more in the passing attack, they should have a pretty decent development candidate in Luke Willson. In fairly limited action this year Willson was good for 272 yards, and has better straight-line speed than Miller, and may be an equivalent-or-better receiver as soon as next season. If the team needs a blocking tight end they should be able to find one in later rounds, and considering that they carried three tight-ends for much of 2013, there’s not a lot of incentive to try to maximize the versatility of one tight end at a high cost, when they can find three distinctly different tight ends for a fraction of the cost. Of course, the Seahawks are Super Bowl champions, and Miller may be willing to re-structure, or return upon his release.

Billed as a special teams ace, Farwell has been a part of a unit of this team that the front office has assigned high-value to. Special teams aren’t insignificant, and while the Seahawks defense receives a lot of deserved credit for the team’s success this year, Jon Ryan and the team’s punt and kickoff coverage units contributed greatly to the team’s sixth-best average defensive field position. Farwell contributes very little within the actual defense though, and while Farwell is technically listed as the team’s second string middle linebacker, the team has shown a tendency to use K.J. Wright in the middle when the starter is out. Even if Farwell wants to return, his minimum base salary would be $855,000, which would negate much of the $1.5 million savings the team would receive by cutting him, effectively signaling a prospective exit as permanent, rather than one that could be re-worked.