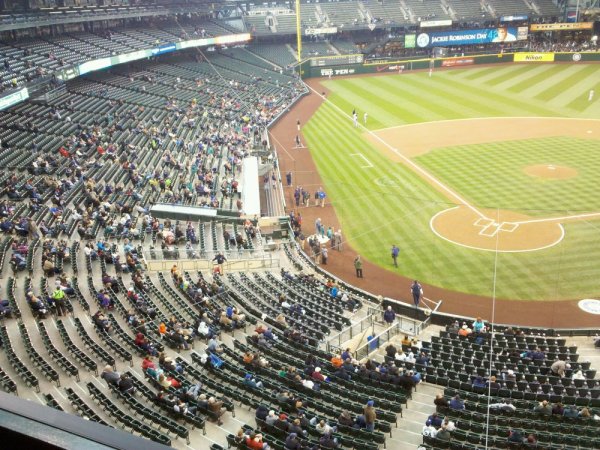 Over the last decade (2004-13), only the Pirates and Royals have played worse baseball than the Mariners, who have averaged 90 losses per season and haven’t sniffed the postseason. They have lost half their paid customers since 2002, falling from first in the league in attendance (3.54 million) to 11th (1.76 million). Source: Tom Verducci at Sports Illustrated
The recent heat on [Nelson Cruz] would suggest he’s likely to land a better contract than [Kendrys Morales], about whom the rumor mill has been comparatively quiet. Given Morales’s other advantages over Cruz, the only reason for the Mariners to prefer Cruz to Morales is his experience in the outfield. That is to say, Seattle would effectively be paying Cruz for his fielding. Talk about a bad investment. Source: Cliff Corcoran at Sports Illustrated  (Corcoran has done a very good analysis of why the Mariners would be better off by signing Morales instead of Cruz. You can read it here.

BTW, while most in industry believe Cruz will sign with Mariners, that doesn’t mean it will happen. Most thought Cano would stay in NY. From: Bob Dutton at The News Tribune

Ken Davidoff of the New York Post predicts that Cruz will get 3/$30M and Morales 2/$20, which sounds about right.

The Texas Rangers have agreed to a 10-year deal believed to be worth $50 million to rename their stadium Globe Life Park in Arlington. The deal with Globe Life and Accident Insurance Co. is shorter than the more common 20- or 30-year agreements, as the team’s stadium lease runs out in 10 years. But the annual payout is believed to be one of the largest in MLB. Only a handful of naming rights deals — led by the approximately $20 million the New York Mets receive annually for Citi Field — are larger than this one. A majority of baseball stadium naming agreements pay the teams between $2 million and $3.5 million annually. Source: Jeff Mosier at the Dallas Morning News

On Wednesday, the Rangers added another revenue stream with the agreement with Globe Life, a Dallas-area insurance company based in McKinney, Texas. If you couple that with the huge television deal signed a few years ago that kicks in next year, the Rangers are in solid shape financially. This ownership group has made it clear that it wants a contender and has already showed that by opening the checkbook. So expect most of the money generated from the sale of the naming rights to be put back into the club. Source: Richard Durrett at ESPN Dallas/Fort Worth

Three teams have emerged as finalists for Ironman Bronson Arroyo‘s services: the Diamondbacks, Dodgers and Orioles, with the Diamondbacks slight favorites. From: Bob Nightengale at USAToday

DJ Peterson is flying from his home in Gilbert, Arizona to New Mexico this week to see live pitching from some former college teammates to help get him ready. Then he’ll head to Peoria and prepare for whatever comes next. Confidence won’t be an issue. While he admits he still has lots to learn, Peterson also says reaching the Majors is his next goal.

He’ll likely open this season back at Clinton or high Class A High Desert, but he could move up the ladder quickly if his bat keeps producing. There are questions over whether Peterson will remain a third baseman or not, but he said that’s not an issue for him.

“I felt great playing there last year,” he said. “I felt like everything kind of clicked. But if [general manager] Jack [Zduriencik] calls me and says, ‘Hey, I want to move you up, but you’ve got to play first,’ my answer is, ‘Yes sir.’

“If he says, ‘Hey, I want to move you up, but you have to play left field,’ it’s, ‘Yes sir.’ If it’s, ‘Hey, you’re going to DH, but we need your stick,’ ‘Yes sir.’ I don’t care where they play me. I want to stick at third, but if the future isn’t there, I’m willing to compromise. I’ll play wherever they need me.” For Peterson, any question of that became crystal clear in the blink of an eye last August. “I had a full month to sit there and do nothing except think about baseball,” he said. “This is what I want to do.”  Source: Greg Johns at MLB

Baseball America has gathered estimates of what every team spent on international amateur players during the 2013 calendar year. The timeframe overlaps multiple signing periods, including the second half of the 2012-13 signing period in which Major League Baseball gave every team a $2.9 million bonus pool, as well as the 2013-14 signing period, which began on July 2 last year and had teams begin with tiered pool spaces based on reverse order of major league winning percentage from the previous season. The spending estimates do not include players who are exempt from the bonus pools, like Asian or Cuban players who are at least 23 years old and played at least three seasons in a foreign professional league.

Canada’s cross-border sports discount shopping spree may finally be coming to an end. It’s been a good run. For nearly a decade participation in US-based sports has been at marked down prices for Canadian clubs — at least according to historic trends — thanks to the robust health of the Canadian dollar compared with its US counterpart.

That’s changing. For the first time in five years the dollar is hovering around (US) 90 cents and some economists are predicting we will see an 85-cent dollar by the end of 2014. Where it goes from there only Nostradamus knows, but it’s seems the currency parity-party could be over. The reason isn’t complicated: the single greatest expense for all Canada’s NHL teams, the three MLS teams, the Toronto Blue Jays of MLB and the NBA’s Raptors is player salaries, which are paid in US dollars. As the Canadian currency slides, expenses rise. “It won’t affect our plans for this year, we’re already locked and loaded (with regard to payroll),” says Blue Jays president Paul Beeston. “But it will affect our bottom line, that’s for sure.” Source: Michael Grange at Sportsnet.ca

Jack Cust signed a minor league deal with the Baltimore Orioles and will report to Twin Lakes Park. Cust did not play in 2013. From: Roch Kubatko at MASN

Chaz Roe has cleared waivers and has elected free agency rather than accept assignment by the Rangers. Roe, a 27-year-old former Mariner reliever, came to Texas via waiver claim in early November. Pitching last year for the Diamondbacks, Roe threw 22 1/3 innings of 4.03 ERA ball, with 9.7 K/9 and 5.2 BB/9. Roe was originally the 32nd overall choice in the 2005 draft. Source: Jeff Todd at MLB Trade Rumors