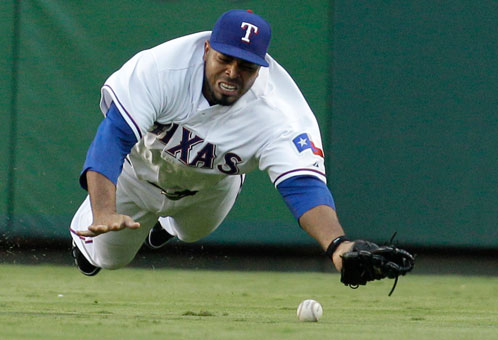 The consequences of running in circles three times before going after the ball.

There’s a sense around the game that Seattle does have one more significant move to come, be it signing Tanaka, trading for David Price, or further cluttering the left side of their defensive spectrum with a draft-robbing deal for Nelson Cruz. Source: Cliff Corcoran at Sports Illustrated

“The Yankees need to be that highest bidder. More to the point, Hal Steinbrenner, son of George, needs to be that highest bidder. If he loses Tanaka to, say, Cano’s Mariners in the name of staying a few nickels south of the luxury-tax threshold, the move (or non-move) would betray his claim that the pursuit of a title is more important to him than the bottom line.” Source: Ian O’Connor at ESPN New York

“We should be doing everything possible to try to get smaller market teams the necessary veteran leadership to contend.”

—Scott Boras to Peter Gammons at Gammons Daily  (As long as we get it from him, Boras meant to add.)

“The myth-making that says players before 1993 never used anything but tobacco and Gatorade is self-delusion of the highest order.” From: Keith Law at ESPN

(Rationality and baseball more often conflict than not. Rarely do so many disagree so often about so much with so little probability of change.)

Interesting tidbit on new posting system: Per sources, the $20M fee will be paid in two installments – $13M the first year, $7M the second. Idea behind split payment is allow more teams the realistic opportunity to bid for a Tanaka – or any other Japanese player who is posted. From: Ken Rosenthal at Fox Sports

Japanese pitcher Masahiro Tanaka will meet with the Cubs and White Sox this week…likely in Chicago. From: Luke Stuckmeyer‏ at CSN Chicago

Agents for Ubaldo Jimenez telling clubs that he still expects to sign a multi-year deal at $14 million-plus annually. From: Ken Rosenthal at Fox Sports

Many are quick to glance at Jimenez’s splits and state that he had a dominant second half. While that’s true — he had a 1.82 ERA after the All-Star break — Jimenez’s rebound began much earlier than that. After allowing 19 earned runs in his first 17 innings, Jimenez pitched to a 2.61 ERA with a 179-to-69 K/BB ratio from April 29 through season’s end — a span of 28 starts. Source: Steve Adams at MLB Trade Rumors

[Scott] Boras has another suggestion—during the last ten days of February right in between pitchers’ PFP drills and the opening of exhibition games, have a 64 college tournament in Florida and Arizona, played at nights in major league spring training parks. MLB Network could televise the tournament, college players would have faces, not just Baseball America, MLB.com and Keith Law names, and when Carlos Rodon, Jeff Hoffman or Brad Zimmer get taken in the first round of the draft, fans watching MLB Network will have a clearer picture of who and what their team is getting. In addition, the revenues generated could be used to get college programs from 11 to 20 scholarships, which should increase and improve the talent base, MLB’s investment in its future talent. Source: Peter Gammons at Gammons Daily

Mike Napoli saw 667 fastballs with runners on base last season, the most in baseball. He was followed y Joey Votto (655) and Dustin Pedroia (640). Source: The Bill Chuck Files

The Pirates have signed INF Robert Andino to a minor league contract, which includes an invite to Major League spring training. From: Pittsburgh Pirates

Steve Adams: Have to think Tanaka offers the most upside, but Jimenez is probably more realistic. Maybe Jimenez and Balfour or something.

Comment From TwinsFan: Is the hold up on Garza to Twins that he wants 4-5 and the Twins will only go 3?

Steve Adams: I think the Twins will only sign Garza if he just falls into their laps on a two-year deal or so, and that’s not happening. They’ve already invested heavily in the rotation and I don’t see them being ultra-aggressive on Garza. He wants at least four years.

Comment From M: Nelson Cruz: Is he going to end up taking a 1 year deal? Does something like 1/16 make sense for him to bolster his resume? The A’s were connected to him at one point, could use a DH, and probably can spend some cash on a short-term deal; even up to 2/35. What’s your prediction for where he eventually ends up and for what price?

Steve Adams: I think he can still find two years, but his original hopes of $16MM+ per year over four years seem completely impossible (not that I thought they were plausible at the time). I predicted 3/39 prior to the offseason but something like 2/26 or 2/30 might end up getting it done eventually. As for Oakland, I don’t think Cruz ends up there, no.

Comment From Prich: Would the Rays consider adding Jennings to a Price deal with Seattle, provided the Ms were finally willing to part with Walker or Zunino?

Comment From Guest: Will the Mariners really enter the season with Ackley/Cano/Franklin on their roster?

Steve Adams: I think a trade of Franklin makes sense for them at this point. He doesn’t have a starting spot since Miller’s a better defender at short, but plenty of people would still want that bat at second base. He has plenty of value.