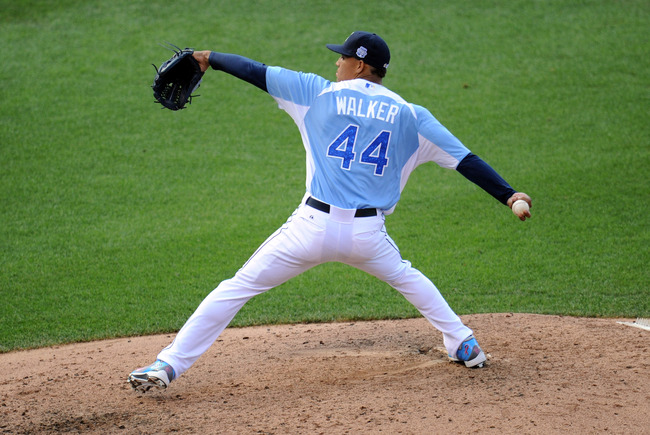 Will I remain a Mariner?

I don’t have intentions of trading Taijuan,” Zduriencik said. “You listen to any opportunities that present themselves and you go into discussions with a lot of people. And his name will come up. Why wouldn’t it? As do a lot of our guys, quite frankly. But Taijuan is high profile because he’s rated our top prospect. So if I was a club out there, why wouldn’t I ask about Taijuan Walker? That would be a smart thing to do, because you never know where it’s going to take you. But I have no intentions of trading him.”

“We’ve looked at it, but we have to figure other parts of our club right now and where you’re going to spend your available dollars,” he [Zduriencik] said. “We liked what we saw out of Sucre last year [as a backup]. I think he’s very capable of doing that. “It’s challenging to go with two young kids like Zunino and Sucre, but as you go down the road with other areas of your club, if that’s what you’re forced to do, then that’s what you do. And in any deal we might make, we may get a veteran catcher back. But right now, that’s not a huge priority at this point. There are other things we need to look at first.”

Zduriencik said a backup backstop is not as high on his wish list as other areas of need. “We’ve looked at it, but we have to figure other parts of our club right now and where you’re going to spend your available dollars,” he said. “We liked what we saw out of Sucre last year [as a backup]. I think he’s very capable of doing that. “It’s challenging to go with two young kids like Zunino and Sucre, but as you go down the road with other areas of your club, if that’s what you’re forced to do, then that’s what you do. And in any deal we might make, we may get a veteran catcher back. But right now, that’s not a huge priority at this point. There are other things we need to look at first.”

“It comes down to cost,” Zduriencik said of potential free-agent closer. “If you take an available chunk of money and put it into a closer, that would help. That would be great, but that may prevent you from addressing other areas of your ballclub.” “We’ve done a pretty good job of filling the back end of the bullpen. I think we would look at adding a legitimate closer as a lower priority right now.” Zduriencik is high on hard-throwing youngsters Carson Smith and Dominic Leone and said both will be given a shot at earning a roster spot this spring, but neither is a potential Major League closer yet and realistically may be more targeted for Triple-A after pitching last year for Double-A Jackson. Source: Greg Johns at MLB

Talked to a few baseball people and most didn’t believe that the story about upper management dysfunction would have any effect on the Mariners in negotiating with free agents. Most [in] baseball stick together. And the idea of airing of the club’s dirty laundry in that format seems to be taboo in their thinking. It seems many people are siding with Zduriencik. —Ryan Divish

Tony LaRussa took some questions after the press conference. While everyone was asking about past, I was able to sneak in a question about this future. He talked about working the commissioner’s office since retirement, but he wants to go beyond that and get into a front office position. “I miss the winning and losing without missing the dugout,” he said. “So someday I’ll be back in the game.” Would that someday include president of the Mariners? “Those decisions are made by other people,” he said. “But I’d like to be part of the competition again. That place has got great potential.” Source:Ryan Divish at the Seattle Times

(I don’t know about Lincoln but this makes too much sense to ignore. Think about it Howie, working every day with a Hall of Famer to be; you could go to Cooperstown and bask in his reflected glory when he’s inducted next summer. You could tell the people visiting you in the old folks home all about it in a few years.)

Zduriencik on priority of getting a right-handed bat: “I think it would be very important. That could very well be our main focus.” From: Bob Dutton at The News Tribune

Mariners believe that if they give up Taijuan Walker, David Price would be theirs. They believe they erred including him in bid for Upton last off-season. Mariners people don’t want to include Walker or Paxton and would rather build Price offer around position guys.  Jon Heyman at CBS Sports

Which Astros prospects will arrive this year? Outfielder George Springer, who hit 37 home runs and stole 43 bases between Double-A and Triple-A, could break camp with the big league team. First baseman Jonathan Singleton will need more time in Triple-A after a disappointing season but could arrive at midseason. Mark Appel, last June’s first overall pick, will be on the fast track and could reach Houston sometime this season. Source: ESPN [Insider needed and recommended]

This is how far the Rangers’ pitching staff has come: General manager Jon Daniels said he isn’t actively looking to trade for a top-of-the-rotation starting pitcher Monday. “Probably not,” Daniels said. “We have checked in with what there is out there. We’d love to have some of the guys that are out there, but there doesn’t appear to be a fit for us.”

The Rangers have been linked to Tampa Bay as a potential trade partner for David Price, who has two more years of club control. The Chicago White Sox, according to several reports Monday, would also consider listening to offers for Chris Sale. Chicago owner Jerry Reinsdorf dismissed the possibility.

“The more I see,’’ he told The Seattle Times that season, “the more I am convinced there isn’t a connection between superstars and winning.” From: Larry Stone at the Seattle Times

Kendrys Morales: In a market almost devoid of power, you would think Morales would be a popular figure. But he, too, has that lose-a-draft-pick stigma attached. And NL teams view him, for the most part, as a guy who needs to stay in the AL because of health and defense worries. So almost no one saw him signing any time soon. “He’s in trouble,” said one AL exec. And one NL executive made it clear how much he agreed — by picking March 20 as Morales’ signing date, unless the Mariners strike out on the other bats they’re chasing and bring him back. “I think he has all the makings,” the exec said, “of this year’s Kyle Lohse.” Source: Jason Stark at ESPN [Insider needed and recommended]

Still hearing Brewers priority to re-sign Corey Hart if the cost doesn’t get too high. Will be interesting to see if landing spots for Ike Davis dry up. From: Adam Rubin at ESPN New York

Shin-Soo Choo, according to two sources, is the Rangers’ top priority and they are in a “very competitive situation,” one source said. The issue with Choo is that Boras is believed to be seeking a deal similar to the one he negotiated with the New York Yankees for Jacoby Ellsbury last week. Ellsbury signed a seven-year, $153 million deal – an average of $21.86 million. Choo might get a slightly higher annual average value, but might have to take a deal of five or six years.

All of this is also complicated by the uncertain situation surrounding Japanese pitcher Masahiro Tanaka.

Tanaka, 25, might represent the best value on the market if he gets posted because it would take less money than to sign Choo. But it is uncertain when MLB and Nippon Professional Baseball will sign an agreement on the new posting system. And, if they do sign an agreement, it’s unclear if Rakuten, Tanaka’s Japanese team, will post him. That situation could start to clear Tuesday when Rakuten president Yozo Tachibana arrives at the winter meetings.

If the Rangers were to sign Tanaka, they could then look to deal one of their other pitchers, such as Derek Holland or Alexi Ogando, in exchange for a more inexpensive, but productive bat. Kansas City’s Billy Butler could be on the market. It would be risky, however, to wait out the Tanaka situation without any guarantees. If the Rangers do, it’s possible both Choo and Cruz could be taken off the free agent market in the meantime. Source: Evan Grant at the Dallas Morning News  (The Mariners face a similar dilemma regarding Choo and Tanaka. They have not stated an interest in Tanaka but they would not say so if that was their intention.)

Heard there’s “good chance” Trumbo is moved during Winter Meetings. The Diamondbacks are definitely a possibility, but the Angels are engaged in lots of talks. From: Alden Gonzalez at MLB.com

The Tigers are viewed as frontrunners for Rajai Davis per Industry source. From: Ben Nicholson-Smith at sportsnet.ca

After agreeing to a $240 million deal with Robinson Cano last week, the Mariners would again be rolling some very expensive dice on any deal with the injury-plagued Kemp, who is owed $128 million over the next six years. The Dodgers are still looking for a third baseman and would likely be asking for Kyle Seager in any deal, assuming they are unable to re-sign Juan Uribe.  Source: Doug Mittler at ESPN [Insider needed and recommended]