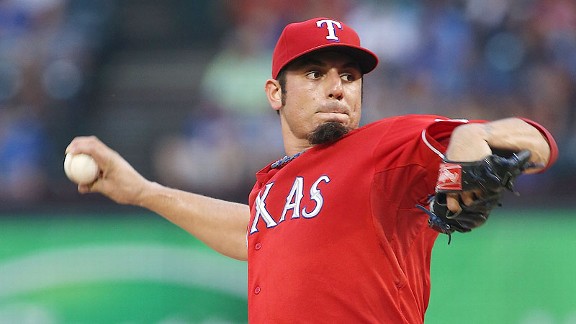 That sounds like Kendrys Morales and Nelson Cruz unless they remember that defense helps to stop runs, too. Also, No. 2 pitchers turning into No.5s? Sounds like Hisashi Iwakuma isn’t seen as a legitimate No. 2, unless they see him as the No.1 and want to slot someone ahead of Felix Hernandez. Did they not notice his Cy Young nomination?  And they must have money to burn if they want to buy a free agent closer.

We tend to dwell on the Mariners’ absence of a long-ball threat in the middle of their order, but what they really need is some athleticism: fast guys who can chase down line drives in the gaps, and then hit line drives their speed converts from singles into doubles, and doubles into triples. If this person exists, if he bats right-handed and can connect for a few homers and has yet to turn 30 and aspires to become popular in Seattle and won’t require a contract requiring him to be paid nine figures annually until he’s 40, please inform Jack Zduriencik. He’s trying to make a splash into a free-agent pool that’s beyond shallow. It’s empty. —John McGrath at The Olympian

“I ain’t as fast as I used to be, but I’m a better pitcher. I used to overpower them; now I out-cute them.” —Satchel Paige

“Morales runs as if he’s pulling a freight car in the World’s Strongest Man contest. At first base, which he occasionally stations with the dexterity of a potted plant, he’s an injury waiting to happen”.  —John McGrath at The Olympian

Baltimore Orioles fan favorite outfielder Nate McLouth has enjoyed a career resurrection at Camden Yards. His scrappy defensive style, ability to get on base and occasional flashes of power made him a staple on Buck Showalter’s line-up card. McLouth established himself in the mid-2000’s in Pittsburgh, winning a Gold Glove in 2008 and appearing in the All-Star game for the Pirates. Injuries forced him through the farm systems of the Braves and the Orioles. He got a chance in the majors again when the Orioles scooped him up to play left and platoon against right-handed power pitchers.

During the Orioles playoff run in 2012, he got into 55 games, hitting .268 with 7 HR, 12 doubles and 18 RBI. He also walked 22 times boosting his OBP to .342. McLouth signed a one year $2 million deal in December, 2012.  He came out of the gate strong in 2013, but seemed to fade after the All-Star break, finishing at .258/ .329/ .399.  He stole 30 bases and walked 53 times in 146 games. With similarly talented outfielders David DeJesus and Marlon Byrd both landing multi-year contracts, it is likely the Orioles will need to offer McLouth something similar to keep him on the roster. —Based on a piece by Christopher Brush at Sports Injury Alert

The southpaw compiled 192-plus innings in each of his past three seasons with the Mariners to go along with a 3.96 ERA. Vargas also had a career year in 2012. The lefty pitched to a 3.85 ERA and collected career bests in wins (14), starts (33), innings (217 1/3), strikeouts (141), WHIP (1.18) and strikeout-to-walk ratio (2.56). Vargas does surrender the long ball — he’s allowed the 10th-most home runs since 2010 among active starting pitchers, but free agents Bronson Arroyo, Ervin Santana and Phil Hughes have permitted more. Vargas could be looking for a three-year deal and it seems the Angels would like to re-sign him. “We’ll maintain a rhetoric with him and do have interest in him returning,” Angels general manager Jerry Dipoto said on Nov. 4, per MLB.com. “I think it’s a mutual interest. There’s a number of starters out there that we have interest in on some level but right now our priority is focusing on Jason.” —Jordan Hall at CSN Philly

Maybe if we stopped calling them “closers” and “setup men,” and referred to them as “backup pitchers,” we’d be reminded that relievers are basically just the pitching equivalent of a backup shortstop. Or maybe we should go the other way and invent fun nicknames for bench guys. Instead of a derisive term like “utility infielder” for Nick Punto, I suggest the A’s start referring to him as their “defensive savior”. Or maybe “infield rescue expert”. Maybe, at the end of the day, bench guys just need better marketing gimmicks and their own intro music. —Dave Cameron at FanGraphs

It should be, it seems, a simple matter for clubs to set their rosters to prevent losing players they wish to retain next month in the Rule 5 Draft, which occurs December 12 at the Winter Meetings in Orlando, Florida. The devil is in the details, which each club must iron out before the deadline at 11 p.m. Central time Wednesday. Prospects eligible for the draft must be protected — i.e. added to the 40-man roster — before that time to prevent their possible selection. Protection comes often at the expense of players already on the roster. Prospects become draft eligible after four or five pro seasons: Four years for players who are 19 or older when they sign their first pro contract; five years for those younger than 19. After Wednesday, clubs can continue to add major-league free agents to their roster, even if it requires a corresponding space-clearing move but are prohibited from adding any player from their minor-league system.

The key in determining whom to protect (as well as whom to select next month in the draft) often comes down to one thing: Is the player in question sufficiently advanced to remain in the majors for the entire ensuing season? Players selected in the draft must be offered back to their former club (at half of the $50,000 selection price), before they can be sent to the minors. A Rule 5-drafted player can be sent to another club in trade or through a waiver claim, but he still must remain the entire following season in the majors or be offered back to his former club. A pitcher viewed as having upside can often be buried as a mop-up reliever for one year — the restriction only covers one year — before being sent to the minors for more seasoning. —Based on a story by Bob Dutton at the Kansas City Star

Despite a snag in the efforts to reach agreement on a new posting system, Masahiro Tanaka should still be available as one of this winter’s top free-agent prizes. For a moment in Orlando, it appeared as though the age-old dispute between small-market and large-market clubs — including a heated argument between Yankees president Randy Levine and Pirates CEO Frank Coonelly — could stall one of the Yankees’ biggest offseason plans. The Daily News has learned, however, that the issue between MLB’s own clubs was a moot point all along because of a refusal by the MLB Players Association to make any changes to the Basic Agreement. Both the Japanese posting system and the international spending cap are part of the Basic Agreement between MLB and the union. MLB’s COO Rob Manfred informed the entire group that he had already discussed the issue with the players’ union, which said there was no way it would reopen the Basic Agreement, leaving the matter to be dealt with when the current CBA expires after the 2016 season. At that point, commissioner Bud Selig stepped in and tabled the discussion.

The new posting process could be approved by Nippon Professional Baseball as early as next week, giving the Rakuten Golden Eagles plenty of time to post Tanaka, one of the Yankees’ top targets this winter. A report in the Japan Times said the Japanese players’ association had accepted revisions to the posting process, paving the way for NPB to approve the new system with a vote on Monday. If the new system is approved, players such as Tanaka could start applying to move under the new system before the end of the month. Under the new system, the final posting fee would be an average of the top two bids rather than simply the highest number; the higher bidder still would be awarded the rights. Tanaka, who went 24-0 with a 1.27 ERA for Rakuten this season, is expected to draw the biggest posting fee of all time. There has been speculation that the fee could even exceed $100 million, and that’s before the winning team negotiates a contract with the right-hander, expected to be in the range of six years and $65 – $70 million. —Based on a story by Mark Feinsand, Bill Madden and Kristie Ackert at NY Daily News