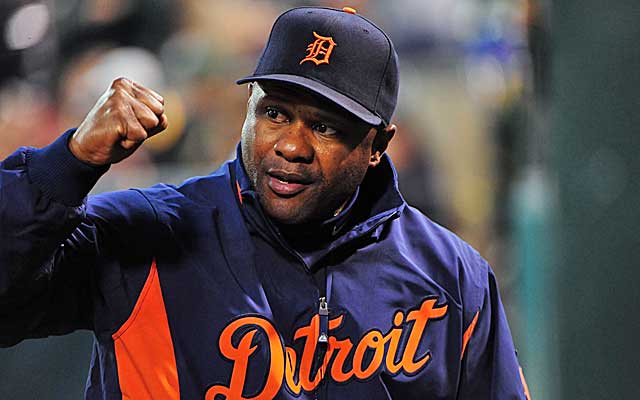 [Lloyd McClendon] didn’t get the chance to manage in Detroit. His opportunity in Seattle seems no less satisfying for [Jim Leyland]. “Oh, I’m thrilled. There’s no mixed emotions,” Leyland said Wednesday evening in a phone conversation, having just returned from the Tigers organizational meetings. “It’s a great opportunity for him with a lot of big arms out there. I think they have a great chance to get good quick.” —Jason Beck at Becks Blogs

Though teams are usually hesitant to give up draft picks and bonus-pool money for free agents who receive qualifying offers, some exceptions apply.  A team experiences smaller losses if it signs multiple free agents attached to qualifying offers. The Indians last offseason had a protected first-rounder. They lost their second-rounder for signing first baseman/outfielder Nick Swisher, then a competitive-balance pick (no. 69 overall) for signing center fielder Michael Bourn. The Mariner’s first round pick is protected as the Indian’s was, so they would lose their second round pick for signing say Jacoby Ellsbury. If they decided to add another protected free agent, like for instance Curtis Granderson or Ervin Santana, they would then lose their next pick which is a competitive lottery pick at the end of the second round. So the M’s would still have a first round and a third round pick, plus two free agents valued at the mid-point of the top 125 player salaries, which is what determines the $14.1 million cash value of a Qualifying Offer.

The A’s don’t have a lot of work to do. They won this division each of the last two years, finishing fourth in the majors in run differential in 2013, and the team will remain largely intact in 2014.  Outfielder Michael Choice and pitching prospect Sonny Gray, who made his mark in the Division Series, represent in-house upgrades for next season, and elite shortstop prospect Addison Russell will open the season in Double-A, putting him tantalizingly close to reaching Oakland, perhaps by September. A team with more spending power might look to add a star via a big bat or perhaps an established closer, but that’s not how the A’s do business. Given their success the last two seasons, there’s little reason to believe they should change course. —Cliff Corcoran at Sports Illustrated

Mac and Jack, the new Mariners duo. Till death — or discord — do they part. —Jerry Brewer in the Seattle Times

Ken Rosenthal of Fox Sports says that: “The Yankees’ qualifying offer will hurt Curtis Granderson’s market, given the reluctance of teams to sacrifice high draft picks and the accompanying bonus money for free agents. But compare Granderson’s slash line to Nick Swisher’s a year ago, when Swisher landed a four-year, $56 million free-agent contract from the Indians after the Yankees stuck him with a qualifying offer. Granderson: .261/.340/.488. Swisher: .256/.361/.467. That’s right, both had the same .828 OPS in almost an identical number of career plate appearances. Granderson, who turns 33 on March 16, is eight months older than Swisher was as a free agent. Swisher is a switch-hitter, Granderson bats left-handed. Whatever, the two were about as close statistically as players can get.

“Granderson was the game’s only 40-100-100 player – 40 homers, 100 RBI, 100 runs scored – in both 2011 and ’12. His 84 homers during that span were 10 more than the player with the next-highest amount, Ryan Braun. Only Miguel Cabrera and Prince Fielder had more RBI. Teams will note that Granderson was not merely a Yankee Stadium creation – he hit 47 homers at home and 37 on the road in 2011-12. They will note that he offers superior – no, sterling – character. And they will note that the market is all but devoid of power, this offseason and beyond. Teams with protected first-round picks – which include Granderson’s hometown White Sox and Cubs, plus the Mets, Mariners and Phillies – should be especially tempted to dive in, knowing they would lose only a second rounder for signing him. The deadline for Granderson to decide on his qualifying offer is 5 p.m. ET Monday.”

Left-hander Jason Vargas wants to remain with the Angels. The Angels want to re-sign him. So what’s the problem?

The market. According to Ken Rosenthal at Fox Sports, “Vargas, a southern California native who attended Long Beach State, might get a strong enough offer to pull him away from home. But the longer he waits, the greater the risk the Angels will turn to other starting pitchers; they are actively exploring alternatives, sources say.

The question is a familiar one: How much money might Vargas sacrifice to remain with the Angels, who reunited him with his former college teammate, Jered Weaver, by acquiring him from the Mariners last offseason? On the other hand, the Angels could regret declining to make Vargas a $14.1 million qualifying offer due to luxury-tax concerns. Vargas, who missed almost two months last season after undergoing surgery to remove a blood clot from his left armpit, is, along with Scott Kazmir, one of the top left-handers on the market.”

The Mariners need a lefty, and they know Vargas and what to expect from him, although he might look even better in front of a team that can score him some runs. Taking him away from the Angels would add bonus points, too.

The rate of intentional walks dropped to an all-time low this year, and it has dropped 36 percent in 20 years. Why? Because every manager plays the same match up game with his bullpen, trying to gain the platoon advantage with a fresh arm rather than allow a free base runner. Twenty years ago Sparky Anderson of Detroit ordered a league-leading 92 intentional walks. This year Eric Wedge of Seattle led the league with almost half as many, 48. —Tom Verducci at Sports Illustrated

George A. King III of the NY Post reports that MLB sent all teams a letter this week instructing them to avoid talking to clubs and players in Japan until a new posting agreement is finalized. According to a person who saw the letter, an agreement could be “several weeks” away as MLB and Nippon Professional Baseball (NPB) continue to negotiate changes to the process.

Cubs GM Jed Hoyer on WGN Radio’s The David Kaplan Show, when asked about Japanese star Masahiro Tanaka, said, “He’s going to help somebody and we will be in on him.”

The number of 120-pitch games has dropped from 498 in 1998 to a record-low 69 this year. —Tom Verducci at Sports Illustrated

Evan Drellich of MassLive.com reports the Red Sox have discussed going into 2014 with Mike Carp as their primary first baseman, should [Mike] Napoli leave via free agency. The 27-year-old was a force off Boston’s bench this past season, hitting .296/.362/.523 (140 OPS+) with 18 doubles and nine homers in 243 plate appearances.

Joe Saunders is a good fit for the Mets as a relatively inexpensive veteran innings-eater, several rival talent evaluators tell Mike Puma of the New York Post.  A pitcher like Saunders would help the Mets rotation in the short term while still allowing the team to spend larger dollars on hitters. —Mark Polishuk at MLB Trade Rumors

Comment From Prich: Kyle Seager: 4/24 with an option… too much, too little?

Dave Cameron: No reason for Seager to do that.

Comment From Max: Are there any free agent starting pitchers you would give 3+ years to for big money? Seems like the risk outweighs the reward

Comment From Guest: We all know that Cano is the big FA fish this year, but it seems like he’s not the proverbial “first domino to fall”, for whom all other FAs are waiting. If not Cano, who is the guy that needs to sign before the logjam loosens this year?

Dave Cameron: Masahiro Tanaka. His posting/signing process is going to hold things up for all the pitchers.

Comment From Grady: What can we expect from McClendon as Ms Manager? Is he known for developing young prospects or a hitting guru or anything positive?

Dave Cameron: Nope, basically just known as a guy who will spew cliches and manage the same way everyone else has managed for 50 years.

Comment From Guest: Who do you see as the Mariners 2014 opening day 2nd baseman, Ackley or Franklin? Do they intend on using Ackley in the outfield permanently?

Dave Cameron: I think they trade Ackley and go with Franklin full time.

Comment From Henry: Have you talked to any scouts/front office people who think that Tanaka is a massive risk (insanely overused)? He’s almost Matsuzaka bad in terms of overuse in Japan.

Dave Cameron: Keep in mind that the schedule is different over there. They’re generally not pitching every five days, so it’s not apples to apples to US pitch counts.

Comment From Alex: Is there any conceivable trade for Prince Fielder out there that you can think of?

Dave Cameron: With Mariners hiring Lloyd McClendon, I fully expect the Tigers to at least gauge the Mariners interest in taking Fielder off their hands.

Comment From Seymour: As an M’s fan, what is your reaction to McLendon?

Comment From Sgt. Pepper: Eithier getting moved this offseason?

Dave Cameron: I think so, yes. Probably to Seattle if they miss out on Ellsbury.

Comment From zeus: Can you picture a scenario where the Mariners acquire Austin Jackson?

Dave Cameron: Maybe. I’d guess that McClendon would probably be happy to push for the team to trade with Detroit.

Comment From zeus: Gun to your head, do you think the Mariners and Tigers make a trade this offseason? Tigers could use a 2B and Pryor, no?