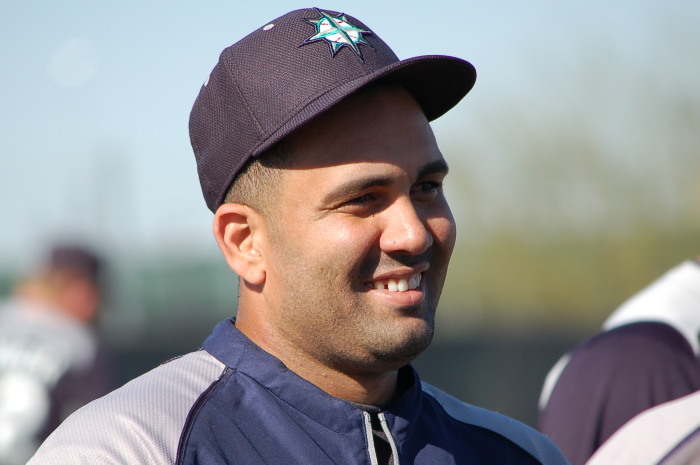 Tim Dierkes at MLB Trade Rumors has written a Free Agent Profile: Kendrys Morales piece which gives a detailed and balanced evaluation of the Mariners’ soon-to-be free agent. He begins with: “Kendrys Morales is one of the 15 best hitters on the free agent market this offseason.  And among proven middle of the order hitters on the market, only Morales can boast of playing the 2014 season at age 30. Offensively, Morales doesn’t stand out in any one aspect, but he doesn’t have any major holes either.  He owns a .280 career average, .275 over the last two seasons.  He doesn’t strike out a ton like Mike Napoli, and he’s shown acceptable power unlike Justin Morneau or James Loney have in recent years.  Morales tied Napoli with 23 home runs in 2013, sixth among all free agents.”

He concludes that: “The best comparable might be Adam LaRoche, who was tied to draft pick compensation last offseason and was unable to get a third year.  Ultimately I think Morales will beat LaRoche’s contract and sign a two-year, $28MM deal with a third-year vesting option.” Here I disagree with Dierkes, being of the opinion that Boras will be able to get three years for him with a fourth-year vesting option for something like 400 plate appearances in 2016, with an average annual value (AAV) of $12 million. This profile is well worth a read.

Trout named Baseball America’s Player of Year. “Mike Trout has been named Baseball America’s Player of the Year for the second straight season, further proof that the Angels’ superstar outfielder accomplished what many deemed impossible in 2013: He actually met expectations after all the hype that surrounded a historic rookie season in ’12. In fact, some would say he even exceeded them.

The Rangers are expecting pitcher Joe Nathan to decline his option for 2014 and become a free agent. A formal decision isn’t expected until after the World Series but the Rangers are preparing to look at other options for their closer with Joakim Soria, Neftali Feliz and possibly Tanner Scheppers as the prime options. Brian McCann is a prime target for the Rangers as they look for a catcher this off-season but they also know that many teams will be interested in him. —T.R. Sullivan’s MLBlog

A’s to lean on solid core heading into 2014. Looking past the disappointment of another game-five loss to Justin Verlander and the Tigers in the first round of the playoffs, the low-budget A’s put together another impressive season. A year after taking home 94 wins, the A’s came away with 96 victories in 2013, along with another division crown. And they see no reason why they can’t tally just as many next year. That’s because little turnover is expected this winter with so many players under club control. Their only free agents this off-season will be right-handed pitchers Bartolo Colon and Grant Balfour. —Jane Lee at MLB.com.

“I have so much respect for him. He has done an outstanding job there.” —Tigers manager Jim Leyland on Ron Washington

“We want to get out there and get going, We’re getting ready for another season, and we’re going to win more. I promise you this: We’re not going to lose 100 games next year. Not close.” —Miami Marlins President David Samson

“You never bunt in baseball anymore, that’s what all the sabermetric people tell me. Stop bunting! No more bunting! Only pitchers bunt. Listen to me, Don Mattingly, no more bunting.” —A.J. Ellis

Tim Dierkes at MLB Trade Rumors has written a thorough review of Shin-Soo Choo in his Free Agent Profile: Shin-Soo Choo article. A lot of teams are in the market for his skill-set, and the bidding should be as brisk as Scott Boras can make it. Dierkes’ conclusion? “With Choo, I can see a lot of teams willing to offer four years, a handful willing to offer five, and perhaps one willing to guarantee six.  The Pence contract seems to raise the bar for Choo, who I ultimately have signing a six-year, $100MM deal.  At a reasonable $16.67MM AAV, such a deal may appeal to teams with luxury tax concerns.”

The Washington Nationals outrighted 25-year-old 1B Chris Marrero to Triple-A Syracuse today, the team announced. He will be a free agent at the end of the World Series. He was the Nats’ first round draft pick in 2006. He looked like a power hitter but seems to have had an outage, slashing .232/.256/.272 with the big club in 133 PA this year. Most likely he will find a team to give him a shot at showing better.

“Seen debate over whether Ellsbury will get $100MM. I think it should be about whether he’ll get $150MM.” —Tim Dierkes at MLB Trade Rumors

Keith Law at ESPN and Chris Crawford at MLB Draft Insider have released their Top 30 prospects for the 2014 draft at ESPN [Insider needed and recommended]. Their list is based on their evaluation of talent and not a prediction of who teams will end up drafting. The Mariners pick is #6, and the draft duo rate Braxton Davidson, OF | T.C. Roberson HS (Asheville, N.C.) at number 5.  Grant Holmes, RHP | Conway (S.C.) HS at number 6 and Brady Aiken, LHP | Cathedral Catholic HS (San Diego) at number 7.

Last year, on the topic of lineup construction, Manny Acta told FanGraphs, “The main thing is scoring runs, so you need to stack up your best hitters up front. You forget about trying to put a guy in the second spot just because he can hit-and-run and bunt,” which is music to the ears of Mattingly’s critics. —Jay Jaffe at Sports Illustrated

Tigers catcher Alex Avila and Red Sox catcher David Ross were born a decade apart. But they have more in common than just their position and the fact that their teams faced off in the ALCS. Both have long histories with concussions, the most recent of which occurred this summer, and both are plying their trade in old school, heavy steel catchers’ masks. “I‘ve been hit hard a few times since I came back, and I haven’t had any issues since then, so maybe it’s helping,” Avila said. “But I think if you get hit hard enough, you’re going to get a concussion no matter what you’re wearing.” Ross agrees. “I did my research, and talked to a lot of doctors and equipment people, and there seems to be no correlation between the hockey mask and a higher rate of concussion,” he says. “But I switched for my own piece of mind, to try something new, and the old-school mask seems to be working fine. I can see, I’ve thrown well and clocked well with it, and the weight of it doesn’t bother me at all.” —Lindsay Berra at MLB.com

Tetsuya Utsumi pitched six scoreless innings on Saturday as the Yomiuri Giants beat the Rakuten Eagles 2-0 in Game 1 of the Japan Series. Utsumi struck out three Rakuten batters, walked two and gave up six hits for the win. Scott Mathieson, Tetsuya Yamaguchi and Kentaro Nishimura each pitched an inning of relief at Kleenex Stadium Miyagi.

Hisayoshi Chono drove in a run on a single to right in the fifth inning and Shuichi Murata added a solo homer in the eighth inning. Rookie pitcher Takahiro Norimoto struck out 10 but took the loss after giving up both runs on four hits over eight innings. Masahiro Tanaka, who went 24-0 during the regular season, is expected to start Game 2 of the best-of-seven series for Rakuten on Sunday.

A first-round draft pick for the Eagles in 2006, the 188-centimeter (6-foot-2), 93-kilogram (205-pound) Tanaka is a right-handed power pitcher with a high three-quarters delivery. With a fastball in the mid-90’s, Tanaka has impressed major league scouts. He also throws a splitter with downward movement, a slider, and the occasional curveball. Like Yu Darvish and Daisuke Matsuzaka, Tanaka was a standout at Japan’s high school baseball tournament. He struck out 459 batters over three seasons, surpassing Matsuzaka’s mark of 423.

Masahiro Tanaka‘s Rakuten Golden Eagles play in Sendai, a city devastated by the 2011 earthquake and tsunami, which damaged the team’s stadium. The area has not recovered fully, but its underdog team, led by Tanaka, is looking to overthrow the popular and mighty Yomiuri Giants of the Central League in the Nippon Series.

“You have to put what he did in context because of what that team did,” says Jim Small, MLB’s vice president for Asia, said in an e-mail. “It was their first league title and has absolutely galvanized that region. Tens of thousands of people are still in shelters and more than 100,000 had to leave the area to find work elsewhere. It is a seriously depressed area. Tanaka and the Eagles have given people there so much to be happy about. It is truly amazing.” Based on a story by David Waldstein at the New York Times

A.J. Burnett, CC Sabathia and Mark Teixeira cost the Yankees $64.5 million this year (including the portion of Burnett’s contract they’re paying for him to pitch in Pittsburgh), and the trio earned their team just 2.5 wins above replacement —Mike Petriello at ESPN

Wakamatsu will serve as the Royals’ bench coach and catching instructor after working as a special assignment scout for the New York Yankees this past season. —From ESPN

The Mariners took [Patrick] Kivlehan in the fourth round of the 2012 Draft, and 200 games and 76 extra-base hits later, assigned him to the Arizona Fall League to finish his first full pro season. Kivlehan, the highest Draft choice out of Rutgers since Todd Frazier in 2007, was the short-season Class A Northwest League’s MVP with 12 homers, 52 RBIs and a .301/.373/.511 slash line after signing in June 2012. He continued his offensive assault at two Class A stops in 2013, Clinton and High Desert, where he combined for 16 homers, 90 RBIs and a .303/.366/.464 slash line. Kivlehan had 13 homers and 59 RBIs in 68 games at High Desert after his midseason promotion to the Class A Advanced California League. Peoria manager Jim Pankovits, who has guided the Mariners’ Double-A Jackson affiliate the last three seasons, likes the tools Kivlehan brings. “Obviously, his power is one. He’s a big, strong kid, so he has some really good power,” Pankovits said. “He makes all the plays. He may not look aesthetically pleasing, but I think a lot of that is due to his lack of playing experience. We’ll polish him up. He’ll get better. He has a strong arm, pretty good hands. By Greg Johns at MLB

With the Boston Red Sox back in the World Series, television ratings jumped for the opener. Boston’s 8-1 win over the St. Louis Cardinals drew an 8.6 national rating and 14.4 million viewers, Nielsen Media Research said Thursday.

The rating was up 13 percent from the 7.6 for San Francisco’s 8-3 victory over Detroit last year, which was a record low for a World Series opener. Wednesday night’s game was seen by 14.4 million viewers, up 18 percent from 12.2 million last year and the most-watched Series opener since the Giants’ 11-7 win over Texas in 2010.