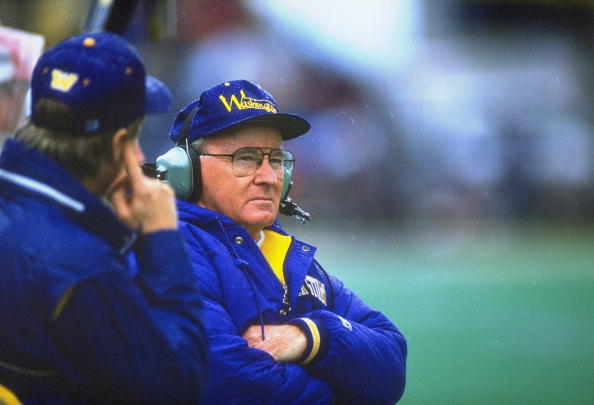 Don James has passed away at the age of 80, after losing his battle to pancreatic cancer, according to multiple reports.

There is no doubt that if Washington carved images of their athletic heroes into the face of Mount Rainier, Don James would be up there. The luxury of being disappointing in a program’s progress in resurrecting itself is a luxury born from an extended period of success, and the architect of that success, without question, was Don James.

James coached the Huskies from 1975-92, winning the team’s only national championship in 1991, and winning four of the six Rose Bowls he took the team to.

I was six years old when James retired. I’m certain that I don’t have the eloquence or familiarity to properly express the gratitude that I feel towards James for contributing the enrichment of the early part of my life, and I don’t have the awareness to reflect on an era of Huskies football that I was barely aware of in real time.

Nonetheless, we offer our condolences to James’ family and friends, as well as former players. Rest in Peace Don James, and thank you for everything.

Rest in peace Don James, the one and only Dawgfather.

I’m seriously crying right now. A piece of me is gone. @UW_Football #RIPDawgfather

What a painful weekend to be a Husky. You will be missed DawgFather. I wish we had gotten a statue for you in time.

Here's our story from August on Don James' annual preseason speech to the team: http://t.co/gZtNV0MJ4X

To a great man and coach, RIP Don James. One of the all time best, who did remarkable things for the University of Washington. #legend

So sorry to be passing along news that former Washington coach Don James has died. Big influence on Nick Saban and Gary Pinkel. RIP Coach.

I played for him, I coached under him and I worked in the NFL because of him. My condolences to the James family. RIP Coach James

Sad news on the passing of Don James from pancreatic cancer. #UWHuskies #cancersucks

Don James never put himself in front of anyone. The Washington football program and its players always came first. RIP Coach James.

Amazing how a man can be such a fierce competitor and yet such a gentle soul. I am a better person for knowing Don James, rest now. #AngieM