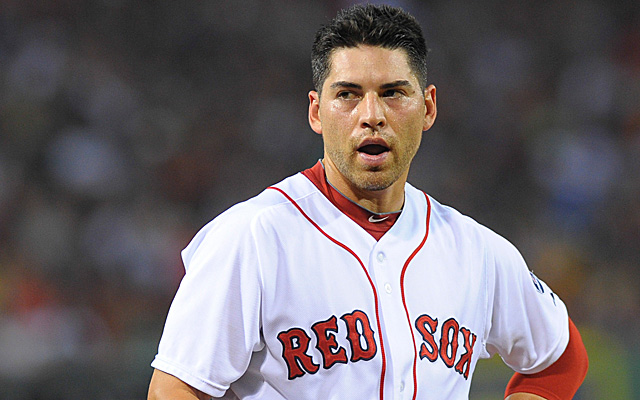 Steve Adams at MLB Trade Rumors weighed in with some chat commentary on the Angels:

Comment From True Grich: Will Peter Bourjos or Kole Calhoun be a starter in the Angels outfield in 2014?

Steve Adams: One of the two will be, for sure. I lean Bourjos right now because he has the longer track record. I’ll be interesting to see if the Halos dangle either in trades, though. Both would have value to another team. Angels need pitching.

Steve Adams: Sounds like the Angels don’t want to move him, but I think for the right package of pitchers they’d have to listen. Probably more of a scenario where someone will have to call and overwhelm them than a scenario where they’re calling teams saying “Hey what would you give up for Trumbo?”

Comment From Andrew: Do you think signings of James McDonald and Ervin Santana would help the Angels? Also, what pitchers would you sign if you were the Angels.

Steve Adams: I don’t think McDonald will help much. Not sure how their relationship with Ervin is after the trade either. I think they’ll look more to trades, but Ubaldo is one of my favorite arms on the market at the moment given his turnaround since April. Kuroda would be a nice get too, though he’s only a one-year fix probably.

“The day he arrived, [Ryne] Sandberg posted a sign in the clubhouse that required all players to report by 3pm for night games. Ok, fine.  He also requires pitchers to report early for regularly scheduled fielding practice, and veterans like Rollins and Chase Utley must join the youngsters for early infield work. Manuel’s player-friendly message appeared to have grown stale, leaving the group receptive to the contrast that Sandberg provided.  But early work like that is extremely rare in the major leagues, and you wonder how long veterans will indulge it.  Tampa Bay’s Joe Maddon is a model for people management in today’s game, and he never does that stuff. So we’ll see how it plays, long-term”. —Andy Martino at NY daily News

“On Monday, the same day the Yankees announced that CC Sabathia would not make his final regular season start because of a strained hamstring, the Phillies’ Roy Halladay was pulled from his start after facing just three batters. Thus came the official ends for both men to what already had been rough seasons — similar to the ones endured in 2013 by Chris Carpenter, Tim Hudson, Josh Beckett, Tim Lincecum, Matt Cain, Jered Weaver, Justin Verlander, Yovani Gallardo, David Price and Josh Johnson, all tried and true veteran pitchers who were All-Stars as recently as just two or three years ago. Throw in Johan Santana, who never threw a pitch, and it’s been a bad year for workhorses.” —Tom Verducci at Sports Illustrated

Brian McTaggart at MLB.com talked to Astros scouting director Mike Elias, who said nothing much changes for the club from a scouting standpoint now that it is picking No. 1. “We’ve been approaching the fall season as if we’re picking in the top three,” Elias said. “We’re on the lookout for any players who could be the top first, third or even fifth picks in the country.” Most experts have North Carolina State’s left-handed pitcher, Carlos Rodon, as the likely No. 1 pick, and he’s definitely on the Astros’ radar.

Houston took Puerto Rican shortstop Carlos Correa with the No. 1 pick in 2012 and Stanford pitcher Mark Appel with the first pick this year. “Being the third year in a row doing it, we have experience, and our approach is we try to ID the top players in each category — college hitters, high school hitters, college pitchers, high school pitchers,” Elias said. “We get the depth stacked up within each of those categories. Last year, we had Appel, [Sean] Manaea, but Jonathan Gray emerged later on. We do feel there’s some more depth again on the college pitching side. Rodon started for Team USA and we’re very aware of that. Even if you have the No. 1 pick, the team that picks second or third keeps scouting all the players because you know what could happen with injuries.”

“We are playing our butts off right now, and it is a lot of fun. We have been playing hard all year. There are so many games we can look back on and say, ‘man, we only lost by one run or man (or on) that one pitch.’ —Bryce Harper

Justin Verlander hasn’t lost to the Twins in his last 13 starts, and there wasn’t much of a chance he was going to do so on Monday. “Just filthy. He was unbelievable,” manager Ron Gardenhire said of the Tigers’ right-hander, who is 4-0 with a 1.89 ERA in his six career starts at Target Field. “I thought there were going to be records set as the game started out. Eight strikeouts in three innings, and I’m going, ‘Oh, Chrysler.’ “ —Phil Miller at the Minneapolis Star Tribune

Jon Heyman at CBS Sports has weighed in with his take on the top free agents in this year’s class. While Cano is unsurprisingly his number one, he is not likely a party of interest to the Mariners. Heyman’s second-ranked player is…

“Jacoby Ellsbury of the Red Sox, CF: He’s played a big role in a World Series title, put up a monster 2011 season (he led the AL with 364 total bases) and proven to be a dependable leadoff man and stellar center fielder. One AL exec cited B.J. Upton‘s $75.2 million, five-year deal as a baseline figure, but that may be optimistic management thinking. Ellsbury will surely shoot for nine figures, and many think he’ll get it despite a few injuries (one was misdiagnosed, exacerbating the situation) and a question as to how close he’ll ever get to the 2011 power numbers. The Red Sox are low-keying their interest but Jackie Bradley Jr. isn’t proven as a major-league center fielder, so they would be in the game at the right price. The Mariners, Cubs (with ex-Red Sox GM Theo Epstein), Blue Jays and many others could also be in the mix. The Yankees, who’d been hoping to get that payroll below $189 million, could be a wild card.” All of Heyman’s opinions on the top 50 free agents can be found here.

Bill Ladson at the Nationals MLB.com site discussed Dan Haren’s off-season plans with him. He says, “Right-hander Dan Haren will make one more start for the Nationals before having to decide what his future will be in baseball. Haren is 9-14 with a 4.87 ERA in 29 starts. Once he files for free agency after the World Series, it’s doubtful he will return to the Nationals. Haren, 33, has thought about retirement, but he plans to play next season. He also realizes that he may have a tough time finding a job right away because of the season he has had in Washington. He would like to play on the West Coast to be close to his family.

“The most obvious thing is, the way I’ve pitched this year, it’s not going to be as easy to get a job to say where I want to go,” Haren said. “I’m going to take a month or two [after the season], just kind of take a deep breath and get back into it.

“Retirement has crossed my mind a few times this year, but with the way the year has gone — and the ups and downs — I feel I have something left that could help a team win. I want to give it at least another year and go from there.” Haren’s representatives can mention this fact to potential employees: After coming of the disabled list on July 8, Haren has a 3.57 ERA with opponents hitting just .234 against him. “I’m throwing the ball much better since coming off the DL,” Haren said. “I made it pretty much known that when I went on the DL, it was more of just a break — physical a little bit, but more mental, just getting myself two weeks to step back. “I had those two bad games a few weeks ago, but I think I pitched much more consistently. I kept the team in it almost every time. That’s how I’ve gone about it my whole career, whether I’m feeling good or bad. I would be able to keep the team in the game and give us a good chance to win. I’ve done that for the majority of the last three months.”

2013 has had the most extra innings games ever at 239 and counting.  It also has the most 10-inning games at 115 so far and the most total extra innings at 565. —From Groundballs With Eyes

Seattle recorded its first back-to-back shutouts since April 21-22, 2011, in Oakland, and their 14 shutouts this season ties for the second most in franchise history, one behind the club record set in 2003. —Greg Johns at MLB.com

The Indians right-hander Ubaldo Jimenez leads AL starters with a 1.86 ERA since the All-Star break. —Ken Rosenthal at Fox Sports

Steve Adams: Tons of questions regarding Abreu and Tanaka (as there are every week), so I’ll just say this…At this point, any prediction as to where they end up would be pure guess work. There hasn’t been enough indication, and virtually every team could use them in some regard. Any team with the money to spend could conceivably land either

Comment From Mark: Will the Yankees give Curtis Granderson a QO?

Steve Adams: I expect them to, yes. Granderson accepting and getting 1/14 wouldn’t be a bad outcome for them at all. That said, I expect him to decline when he gets it.

Comment From Ben: Which of the Dodgers 4 outfielders is most likely to be traded and what kind of return would it bring?

Steve Adams: Ethier’s contract is the most movable, but I don’t think he’d fetch a ton. Dodgers would have to eat some cash to make it happen, and even then, he’s not playing at a high enough level to bring back an impact guy,

something with some incentives. He’d be a decent minor league flier for many teams.

Comment From Bill: Is Roberto Hernandez (aka Fausto Carmona) a good buy low free agent candidate? He had much stronger peripheral numbers this season and looks to be ready for a bounce back.

Steve Adams: Hernandez is similar to Haren in that his peripherals are nice with the exception of his HR/FB ratio. For some reason, he’s giving up insane amounts of homers. HR/FB is a fluky stat though and he pitches in a lot of homer-friendly parks in the AL East, so I’d take a flyer on him for $4-5MM bucks, sure.