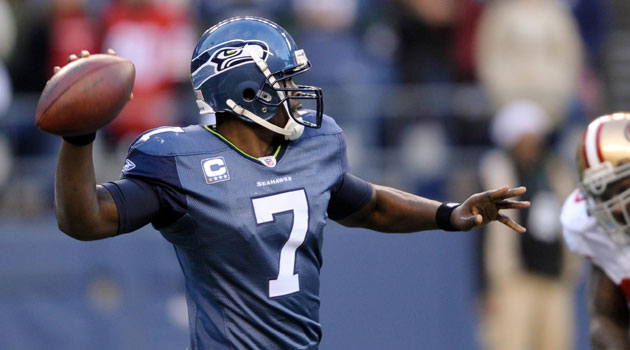 The Seahawks are reportedly close to signing Tarvaris Jackson today in what can only be assumed to be an opportunity for Jackson to compete with Brady Quinn for the backup job.

When the Seahawks sign a basketball player to be a tight end, or a slew of nobody receivers to compete for practice squad jobs the fanbase gets pumped up. When they sign a tough-as-nails backup quarterback candidate with familiarity in the system and time spent in the organization, some people don’t like it at all.

The rub is that Jackson wasn’t particularly good in Seattle. He wasn’t particularly bad either, and his supporting cast left some things to be desired. He’s not a perfect quarterback. He’s got large flaws in his game. He’s a backup. That’s why he’s a backup. The reasons he’s a backup are literally contained within this paragraph, and the reason he’s a good backup are contained within the prior paragraph. Why the fuck must this post go on?

The main reason is because Jackson signing can only be good news. If he’s terrible, they’ll cut him. If he’s better than Brady Quinn it’s an upgrade. Finding a potential negative consequence here is like getting mad at a brewpub for having too many choices on tap, especially if they’ll give you tastes for free. Those assholes!

This isn’t the same situation as last year where the presence of too many quarterbacks could be distracting (which turned out alright, if you ask me). Russell Wilson is the Seattle Seahawks starting quarterback, and the subject of thousands of local mancrushes, most eloquently displayed by our good friend Damian Peterson of Northwest Kingdome. (Seriously, watch this video).