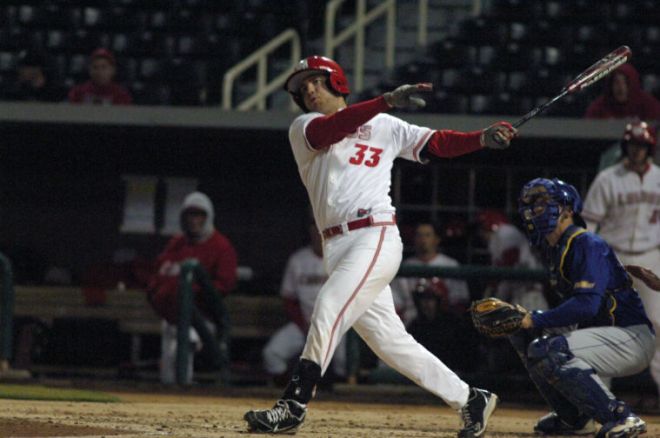 Today the Mariners drafted D.J. Peterson, proving that they’re commited to improving the team’s offense, even if it is at the expense of their defense. Peterson is a guy without a very well defined position, as he plays third base now, but likely won’t stick there. All indications are that he’ll be fine at first base, and may even be able to play a corner outfield spot, but may be the best pure hitter in the draft.

The team has basically no depth in the outfield in their farm system as it relates to viable big league talent, and basically everyone in their outfield now not named Michael Saunders is a free agent at the end of the year (Franklin Gutierrez has a team option that’s basically a guarantee to be bought out). That doesn’t mean that the Mariners will call up Peterson next year, but that there’s a good chance that if he can man an outfield spot he’ll get a shot to in 2015. Even first base is blocked by only Justin Smoak and the ill-commenced progression of Jesus Montero into the position.

The good news I suppose is that drafting Peterson has absolutely nothing to do with Kyle Seager, except that Seager may be cutting off throws from Peterson at some point.

Here’s a video of Peterson:

Here are some things that people smarter than me have said about Peterson:

Baseball Prospectus (video on this page)

Right-handed power with a chance to boast an average or better hit/on-base skill set, as well. Peterson has a simple load, relatively tight bat path, and good extension through contact, giving him a nice foundation upon which to build an offensive game at the next level. He will struggle at times with secondaries but is generally advanced in his approach and in his ability to make in-game adjustments. He offers little in the way of defensive value; his lack of lower-half mobility could quickly land him at first base after draft day.

DJ Peterson may be one of the top college hitters eligible for the 2013 MLB Draft.  He won the Mountain West Conference triple crown in 2012 after setting the NCAA freshman records for doubles in 2011. DJ will be playing for the USA Baseball Collegiate National Team during the summer.

Some of the players we’ve profiled recently are going to be drafted on the strength of their tools and future upside. Then there are players like D.J. Peterson who are going to be drafted very high in June based on essentially what they are right now. Peterson is not a player you project, and not a player scouts dream on. He’s going to show you pretty much everything he’s going to be in the future right here and now, and what he looks like is a very dangerous right-handed slugger. But, he’s going to have to be evaluated very close this spring because he isn’t that “toolsy” player – his game at the next level will be as good as his bat allows it to be.

One of the most appealing college hitters eligible for the 2013 MLB Draft, DJ Peterson is a nominal third baseman who may end up at first or a corner outfield spot in the future. (Based on the shortage of quality 1B prospects, we’d place our chip on that corner if pressed.) Peterson won the Mountain West Conference triple crown in 2012, demonstrating that he can bring smooth, easy power on every plate appearance. His hitch-free swing and growing power have him zooming up prospect lists, and for good reason.