Two rounds down—well, three if you count those four preliminary games—and some Sweetness and Eliteness yet to come! That’s where we stand in the NCAA Basketball Tournament, and thus we’re in the perfect position to break down team performance by mascot.

I should first point out that mascots can be confusing. A “hoya,” for instance is a tropical plant, but a Georgetown Hoya is a bulldog. The nickname came from the shout “Hoya Saxa!” which basically just means “Our defensive line is like a bunch of rocks.” Loose translations… Anyway, I categorized Hoya into the “Inanimate” group, along with such thing as Billikens, Buckeyes and Hurricanes. My game, my rules. 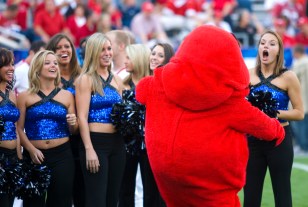 I first broke mascots down by the various scientific phyla, but it turns out the Banana Slugs are division III and not very good at basketball, so I was stuck with 60 vertebrates.* While the Western Kentucky Hilltopper mascot looks like something from the Protista kingdom or a Kool-Aid commercial, a hilltopper is actually just member of the WKU community that must march up a hill to get to campus, and very much a member of the homo sapiens club.

Moving further down the chain, the scientific classes provided me with the first real distinction between teams. I had seven birds, one reptile, eight inanimate non-organisms, three fantasy creatures and 49 mammals. Better, but more work had to be done. Bring on the scientific familes! There we go; now it’s raining Felidae and Canidae. After combining a few of the smaller familes—like the Badgers, Wolverines, Gophers and Jackrabbits—my editor and I agreed on the following taxonomy:** 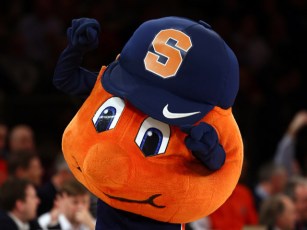 It’s not easy being Orange.

Reptiles: Gators, and only Gators. I couldn’t find anywhere else to put them.

Fantasy: Demons, Devils and…Jayhawks? Apparently a jayhawk is not a real bird. Good, ’cause I always need more Fantasy teams!

Without further ado, here are the mascot standings: 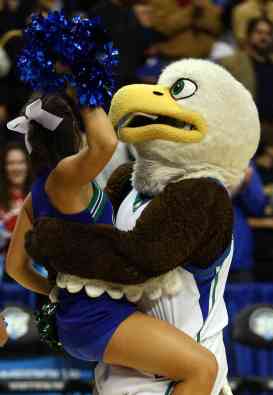 The Gulf Coast Eagles should be celebrating…

The Reptilian Squadron was perhaps a little lucky in that its only representative in the tournament is also considered by some to be one of the best teams in the country. The Fantasy group is also strong, with Duke and Kansas able to make up ground on the Northwestern State Demons’ 32-point drubbing. But ultimately, the best group in both depth and top-tier talent has to be the Birds.

Despite the Blackbirds of Long Island University going out early, each of the other six members of the scientific class, Aves, made it to the round of 32. The Oregon Ducks (12) and the Gulf Coast Eagles (15) then pulled off improbable runs to join the Louisville Cardinals (1) and the Marquette Golden Eagles (3) in the Sweet Sixteen. With an impressive proportion of teams still alive (57%), and the best point differential of any group with more than one team, the Birds lead the way as the most impressive scientific cluster to this stage in the Tourney.

Can the Great Apes pull off an impressive three teams in the final four—perhaps the Hoosiers, LaSalle Explorers, and Spartans—or will the Birds land three with the Cardinals and two species of Eagle? Check back after the final whistle has blown to find out!

*Vertebrata is technically a subphyla of Chordata, in case there are any science nerds out there waiting to bust my chops.

**Pfffff! Like Casey has time for such important matters.