I have two complementary strategies for you to mull over. If you’ve read any of my stuff, you know that I trust data over eyes if I have to choose between to the two. When it comes to the college basketball, I can’t possibly watch even five percent of the games during any season, so I have to go with data. Luckily, data can watch every game, and what data lose in flexibility, they make up for in uniformity and tirelessness. That’s why I tend to look to guys like Ken Pomeroy, Jeff Sagarin, Nate Silver, and John Ezekowitz for guidance in my tournament picks.

Later in the afternoon, I’ll summarize some more of that “good data” for this year’s tournament, but for today I just want to focus on the overarching strategy and some examples.

The combination of the two strategies suggests that you should follow the data throughout much of the bracket, but make some risky picks along the way. Harvard Professor, John Ezekowitz, claims that in larger bracket pools, being riskier than simply picking “the chalk” is an optimal strategy. Stealing a phrase from my old college tennis coach, perhaps Ezekowitz is suggesting that you employ “controlled aggression” in your bracket selections. Create an intelligently unique bracket, striking a balance between picking the most-probable winners and picking a unique-enough bracket within your pool.

There is a common fallacy that because the tournament never works out the way it’s seeded, you should pick a lot of upsets. This may be true if you’re competing with ten million people on ESPN, but not in a smaller pool of less than 100 people. Think about this: no single bracket outcome is very probable. 63 games are going to be played, and there are theoretically nine quintillion different ways any Tournament bracket can shake out. Obviously, many of those outcomes are never going to happen—16-seeds in the Elite Eight and such—but there is still a huge set of relatively possible outcomes such that even the most probable of those outcomes is actually quite improbable.

My point is that the tournament will almost never end up like anyone thought it would, but it is still an optimal strategy to avoid trying to pick upsets purely for the sake of picking upsets. Remember, controlled aggression.

In the past 23 tournaments, we have seen the following:

There are probably a number of ways to achieve effective, controlled aggression in your bracket. Here’s an easy strategy to employ that strikes what I think is the appropriate balance. Choose to be mostly risk-averse throughout the tournament, except in picking your champion, thus concentrating all your uniqueness in the final rounds. For scoring systems that award the same number of points each round, like ESPN’s bracket, this is a solid strategy.

In other words, in brackets where each round is worth the same number of points, it’s smart to pick an overall winner that is not among the two or three obvious favorites. Candidates this year might include the lower 1-seeds like Kansas and Gonzaga, or the upper 2-seeds like Duke and Ohio State. The stat heads mentioned above—Sagarin, Pomeroy, Silver and Ezekowitz—all agree that these teams still have legitimate chances at the title, though they won’t be penciled in to as many bracketeers’ champion boxes. The larger the pool, the further from consensus you should pick your champion, but always with the goal of finding the balance between uniqueness and risk aversion. So with 10 brackets in your pool, there’s no need to get crazy at all. Go ahead and pick Louisville. With 40 or 50 brackets in your pool, now you might drop down to the 3rd or 4th best option (how about Duke?). With 10 million brackets in your pool, I might guess that picking a 5-seed to win it all is an optimal strategy (go with Wisconsin).

Think about this example. If there are 40 people in your pool, then many of them are going to pick a 1-seed this year. The 1-seeds also happen to be the top four teams in the AP poll, which is what many strategists are looking at. It’s hard to guess exactly how many, but a conservative estimate would be that 75 percent of the 40 are going to pick a 1-seed, and many of those will be Louisville. Let’s say that 10 pick Louisville.

If you are one of the ten that goes with Louisville, the top overall team according to the selection committee, Silver suggests there’s a 23.8 percent chance that the Cardinals will win it all. If they do indeed win it all, you’ll still only have about a 1-in-10 chance of beating out the other Cardinal pickers in your pool. Multiply those together, and your chances of winning the bracket are about 2.4 percent. But wait, weren’t there 40 people in this pool? Shouldn’t you be able to achieve at least a 1-in-40 shot at first place? Isn’t 1-in-40, like, 2.5 percent or something? Yes. Correct on all accounts. By picking a consensus favorite, assuming 25 percent of all people also pick them, you may actually be lowering your chances of winning to below the logical baseline of 2.5 percent. 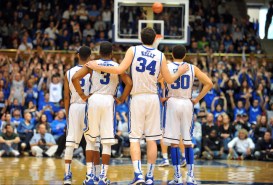 But say you go with Duke, for example. Everyone hates Duke. In a pool of forty people, there might be one other sad soul that picks the Blue Devils as national champions. If we assume that exactly one other person in the pool chooses Duke, then Silver suggests you have a 3.0 percent chance of winning your bracket. The math is actually pretty simple.

Silver claims that Duke has a 6.0 percent chance of winning it all. Since picking the winner is worth as many points as any other entire round in formats like that of ESPN, Duke winning essentially guarantees bragging rights to either you or the other asshole that picked Duke. Your chances must be at least 50/50 at that point, so cut 6.0 percent in half. Voila! 3 percent. By that same logic, Ezekowitz claims the chances of winning your pool with Louisville are only about 1.3 percent, compared to 2.2 percent going with Duke.* Basically, you’re better off going with a slightly less-popular team even though they’re not the best team.

Regardless of which team you pick, your chances of winning a large pool just aren’t that good. But you can increase your chances slightly by avoiding too many random upset picks like VCU (5) into the Elite Eight, and by picking a second-tier team to win it all. Of course, if everyone in your pool subscribes to the strategy in this post, then the strategy becomes garbage. It’s helpful to know your competitors.

*Ezekowitz admits that his system gives too much credit to bad teams, and not enough to good teams, so while 1.3 percent and 2.2 percent probably aren’t accurate on their own, the 0.9-percent difference is the main point.