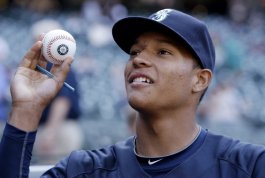 For the second straight year Walker tops the list, and last year I wrote this about him:

When the Mariners drafted Taijuan Walker, the entire Mariners fan base seemed collectively unenthused. Walker was an unknown high school pitcher who was primarily a basketball player in high school. He threw in the 90s, but would he ever be an MLB pitcher? Walker has answered pretty much every question asked about him. He’s improved his velocity and offspeed pitches, and has been so productive that some people (yours truly) have begun to compare him to a young Felix Hernandez.

Walker looked like he had a chance of making his MLB debut before his 20th birthday last year. He fell off a bit, but went from pitching in high school in 2010 to pitching 126.2 innings in Jackson last year. He goes into this season ranked 5th among MLB.com’s top 100 prospects. Walker has never given up more than four walks per nine innings in season, and he’s brought it down to 3.6 BB/9 for the second straight season, despite jumping two levels in 2011, and two more in 2012 to end up in Jackson at that age. Keeping a handle on the homeruns he gives up will likely be a challenge for Walker, and if he ends up in the 8.0 K/9 strikeout range he’ll need to figure out a way to keep pitching ground balls. Walker has ace potential, and could be a true star, unlike most of the Mariners highly reputed farm system.