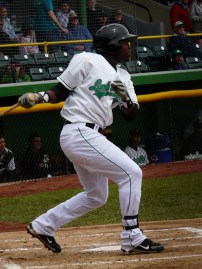 I’ve been pretty reluctant to include Morban on my prospect list, mainly because of the huge strikeout rate he posted in Clinton in 2011. His 2012 power surge was likely aided by Adelanto, California, but he made a huge leap to strike out only 20.3 percent of his plate appearances. Morban also posted a  .352 BABIP to go along with his .237 ISO and 131 wRC+, which likely means he was a bit lucky, though he profiles as a guy that could have some success on batted balls considering his foot speed and power profile.