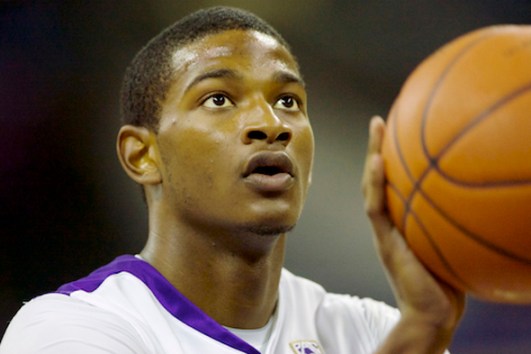 After a truly awful Friday, this weekend didn’t seem like it could get any worse for Huskies fans. I’d overlooked Colorado State to a point that I was actually napping when the game began.

This is one of the hazards of having a DVR, in that in many cases I’m able to watch the game later. That’s fine, because it saves me about a half hour, but because of the variety of mediums I receive sports information on, it’s almost impossible to not know the outcome before digging in.

So when my ESPN app told me the halftime score I woke up. I wasn’t surprised at the score, but what I didn’t know was that Scott Suggs was missing the game due to plantar fasciitis.

What I do know is that the Huskies can’t succeed with only one consistent perimeter scorer. Last year they were pretty awful when C.J. Wilcox went out and their only option on the perimeter was Terrence Ross. Suddenly the area inside the three point line was crammed with bodies, and Tony Wroten had less options to dish to when he drove wildly into the lane. Rather, he had three defenders waiting for him.

That wasn’t necessarily different last night, as Abdul Gaddy and Andrew Andrews had pretty rough games, but what we learned last night was that C.J. Wilcox has the mentality to attempt to take over a game, and to do it early. We saw Terrence Ross take over a couple games last year, but it seemed like he waited until the last 10 minutes to do it. Wilcox seemed to realize the offense would hinge on him early in the first half.

Wilcox shot his way out of his slump to an extent. 11-25 doesn’t seem great, but he drew Colorado State’s top defender mid-way through the first, and Colorado could rotate to him almost every play because the Huskies didn’t have better scoring options, with Andrews and Gaddy missing several open shots.

The biggest issue with the Huskies however, wasn’t a lack of outside scoring, but rather getting absolutely beat up on the boards. The Huskies pulled down only 19 rebounds compared to Colorado State’s 40. In fact, Colorado State had nineteen offensive rebounds.

That led to 17 more shot attempts than the Huskies, and allowed the Rams to shoot 43.3 percent from the field compared to the Dawgs 44 percent, But still outscore the Huskies by 18.

The biggest contributor to the rebounding disparity was Colton Iverson, who dominated the less-polished Aziz N’Diaye on both ends of the court. Iverson pulled down six offensive rebounds, 12 rebounds in total, and scored 13 points.

The decision to move Jernard Jarreau inside to man up Iverson may have been a byproduct of Suggs’ absence, but it was an ill-fated one with a larger, more active Desmond Simmons still available, and a seven-footer like Aziz N’Diaye on the roster.

N’Diaye’s offensive game has improved since he was a freshman, there is no doubt about that. But early in the game we saw him catch great entry passes on the base line with a lane to the backboard, and instead of taking the pass immediately to the rim, he dribbled, jump stopped, then went up, allowing Iverson to close the gap. It wasn’t a completely unproductive move, as it led to one of Iverson’s three fouls, but considering the kind of free throw shooter that N’Diaye is (41.4 percent for his career), the extra dribble is a net loss.

We saw Jernard Jarreau knock down an 18 footer from the baseline early in the first half. Jarreau has a guard skill set, and if he can become a legitimate perimeter threat for the Huskies he’d be a huge coup for the team, as his size creates a huge mismatch and would create a weakness in opposing defenses. To this point his spot in the starting lineup has been a bit conspicuous, and his minutes played have been pretty limited. He’s got tremendously long arms, and can become a good defender, but at somewhere between 200 and 215 lbs (whatever you want to believe) he’s still too small to bang with even college fours and fives.

This season has potential for the wheels to fall off for the Huskies, and this is the first time the team has been under .500 since 2008. In 2008 they lost to Portland in their season opener, but ended the season 26-9. In that team’s defense though, they went below .500 after defeats from Kansas and Florida.